‘It’s a shared journey’: Grecian Ball was all about unity 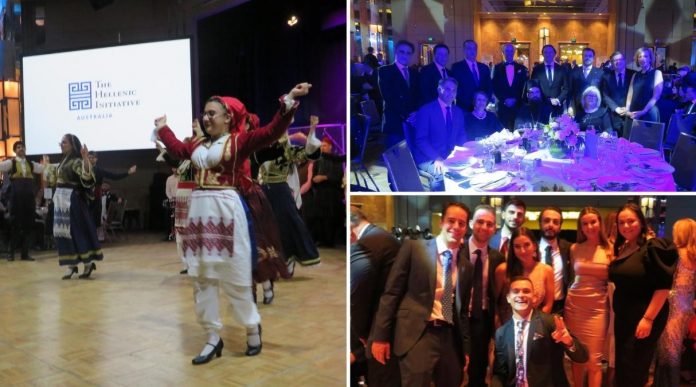 When Greeks band together, they can achieve great things. Freedom from the Ottoman Turks, for one. And Greeks of the diaspora came out in full force on Friday night to celebrate the inaugural Grecian Ball organised by the Greek Community of Melbourne (GCM), the Greek National Day Council of Victoria and the Greek Orthodox Archdiocese of Australia.

Held at the Grand Hyatt it was a lavish affair, though the world ‘inaugural’ may be deceptive.

Tony Tsourdalakis of the Greek National Day Council of Victoria told the 500 people present that “history tells us that our ancestors and forefathers gathered for a similar event over 86 years ago, back in 1936 at St Kilda Town Hall for the first inaugural Grecian Ball with the likes of Lekatsas, Vendouras, Kostopoulos and many, many others”.

Postponed from last year, the event aimed to celebrate 200 years of Independence from Ottoman Turks but also show how far we have come as migrants. An established community, the people at the Grand Hyatt were a far cry from the simple folk who left Greece behind to create a more prosperous life in Australia.

Back then, there were many struggles, but the Greek community has come a long way. GCM President Bill Papastergiadis said that the Greek community these days enjoys “bipartisan support”, and he thanked the pollies present for all they have done to help finance Greek language development, sports and culture.

Mr Tsourdalakis expressed his gratitude for Premier Daniel Andrews’ support to enable Evzones to come from Greece to Melbourne for Anzac Day. He invited those present to watch out for the programme which would be released over the coming days.

Over the week, attention had been cast on former health minister Jenny Mikakos’ negotiations with Culture and Sports Minister Lina Mendoni who had agreed for artefacts from the National Museum of Athens to be displayed in Australia. Though the antiquities display was to coincide with the Bicentenary of Greece’s Independence it will finally open in April at the Melbourne Museum.

Ms Mikakos told the Greek Herald that she had been on holiday to Greece when she met with Dr Mendoni, who had just assumed office at the time. She expressed her excitement to finally be seeing the display come to fruition.

She smiled graciously as Greek community members rushed to meet her, take a selfie, and show their support. “The inaugural Grecian Ball was a great way for our community to come together and celebrate Greek National Day and everything that Greek culture has contributed to the world. Congratulations to everyone involved in putting on a great event,” she told the Greek Herald.

The hall was full, and the wine flowed freely, though Jorge Menidis told the Greek Herald that there had been some cancellations due to COVID-19. You could hardly tell. For the most part there was joy, especially when Melina Aslanidou took the stage and people partied like there was no COVID, and nothing but happy days ahead.

Despite the bright future, it would be remiss to host an event celebrating Greece’s Independence without delving into the past. Mr Papastergiadis showed the link from past to present, by showcasing four themes in the Greek Revolution which are relevant to Greek Australians.

“The first thing is the foundational role of ancient Greece in Western civilisation, and an idolisation of ancient Greece and what relationship that had to the uprising,” he said. “I also want to talk about the role of the diaspora, the people outside of Greece in the formation of the modern Greek nation. Equally, our story of multiculturalism in Australia and how this helps us to understand the uprising, and finally the shared values and bonds between our two wonderful countries,” he said, adding that celebrating Greece’s independence is a “unique experience” for migrants as the Greek War of Independence drew support from the diaspora.

Speaking of the Filiki Etairia, the friendly brotherhood founded in Odessa, Ukraine, in 1814, he said that the revolt commenced when Alexandros Ypsilandis, leader of the society, crossed over to Moldovia in 1820. Mr Papastergiadis added that with “multiculturalism forming the backbone of our society, I think we’re in the very unique capacity here in Australia to form connections with our own cultural heritage but, as well, to forge bonds with the history and culture of other nations and this is precisely what we’re doing here today.”

“As you can see, it’s a shared journey,” he said, while adding that events have swung full circle in Odessa, in the Ukraine now, “fighting for the same ideals of freedom and democracy that we are in fact celebrating here today”.

No one in the room understood these heartfelt words more than Liberal Opposition leader Matthew Guy, who described the situation of his family there. He vowed Ukraine would show the same fighting spirit as the Greeks while pointing to the commonalities of these two nations.

Maria Vamvakinou, Labor MP, told him to take his neighbour’s advice to visit Lefkada as that is where her background is from.