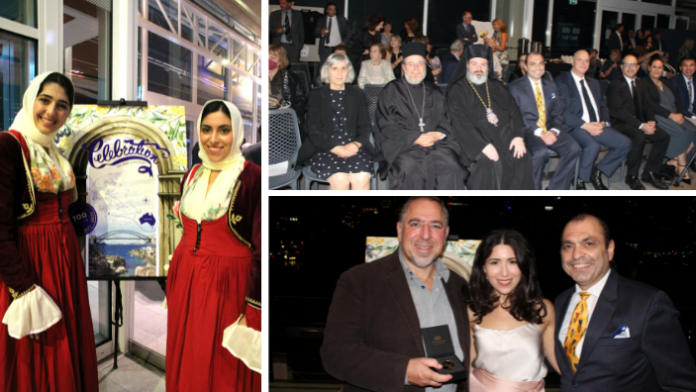 The Kytherian Association of Australia (KAA) successfully launched its centenary celebrations on Saturday, March 26 at the Australian National Maritime Museum in Darling Harbour.

The event was attended by over 150 people including a number of special guests such as the Press Counsellor at the Consulate General of Greece in Sydney, Costas Giannakodimos; His Grace Bishop Christodoulos of Magnesia; the Honourable Peter Poulos MLC; Bayside Councillor, Vicki Poulos; City of Sydney Councillor, HY William Chan; and the President of KAA, Emmanuel Alfieris, among many others.

Everyone enjoyed some light refreshments before the night’s emcee and former Mayor of Woollahra Council, John Comino, invited all the guests to be seated for formal proceedings.

Mr Comino started the proceedings by welcoming everyone to the event and giving a brief history of the KAA. He then invited coloratura soprano Helen Zerefos to sing the National Anthems of Greece and Australia. Ms Zerefos also performed a special ‘Kythera’ song.

There were then a number of speeches from Bishop Christodoulos, Councillor Chan and Mr Alfieris.

In his speech, Bishop Christodoulos praised the Kytherians for their filotimo and Greek hospitality and encouraged them to uphold these values and pass them onto future generations.

Mr Alfieris later took to the stage and talked proudly about the founding fathers and other members of the KAA, before announcing that the Kytherians will have a special panel of names on the National Monument to Migration at the National Maritime Museum of Australia.

During the night, the Chair of the Kytherian Centenary Committee, Andrew Malanos, also read out the names of Past KAA Presidents, whilst Mr Poulos MLC and Councillor Poulos presented Certificates of Appreciation to the Presidents and their direct family members.

To conclude the official proceedings, there was a live auction of three of the 100-year Collector’s Edition Medallions, which have been produced by The Australian Mint. The first coin was bought by Peter Maneas from My Greek Odyssey for $20,000, John Sophios bought the second coin for $6,000 and Mr Alfieris bought the third coin for $10,000.

At the end of the night, there was plenty of mingling and Greek dancing to music by IHO Nyx Band.