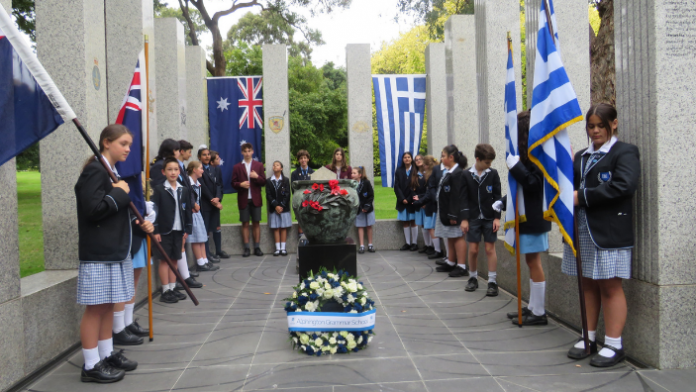 Every year, the brave heroic ex-servicemen of the Hellenic RSL of Melbourne gather together at the Australian Hellenic Memorial created in their honour. This year was no exception, and around a few hundred people were lucky to attend ceremony for the 201st anniversary of Greek Independence.

It was mainly veterans of many ages, standing stiff to attention, though some fingers trembled as they held onto flags. They were men who fought for freedom, honouring their ancestors. But interspersed among them were also children from Alphington Grammar and a few representatives from other schools.

Maria Vamvakinou MP, member for Calwell, an ex-teacher, said she remembered “growing up in the Greek Orthodox church learning Greek in the afternoon school and the most significant thing that was taught to us apart from Plato, Socrates and Aristotle was the Greek revolution”.

This was her response to a question by Greek Consul General to Melbourne Emmanuel Kakavelakis, who asked: “Who created the Revolution?” Casting the spotlight on all the collectives of the revolution, he reminded people of the different groups that made Greece’s freedom possible.

Soldiers, protectors of freedom in more recent battles, decorated soldiers, wearing medals of valour from either Greece or Australia listened solemnly before heading to the Shrine for a special ceremony and then back to the RSL for traditional cod fish and skordalia.

Share
Facebook
Email
Twitter
Pinterest
Linkedin
WhatsApp
Viber
Print
Previous articleManto Mavrogenous: The heroine who gave her soul and fortune for the Hellenic cause
Next article‘It’s a shared journey’: Grecian Ball was all about unity