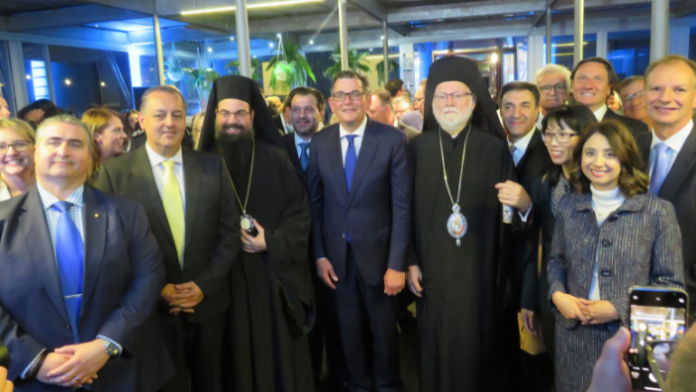 After events celebrating the Bicentenary of Greece’s Independence were marred last year due to COVID-19, there was a spirit of euphoria at the Hellenic Museum on Wednesday. The event, held by the Greek Consulate General of Greece in Melbourne, ahead of the 25 March celebration of Greece’s freedom from the Ottoman Turks did not fail to deliver – especially when Victoria’s Premier Daniel Andrews took the stand.

Victoria’s Premier Daniel Andrews spoke of the offerings of the Greeks to Victoria and announced the coming of the Evzones to Melbourne from April 21-29 for Anzac Day following an agreement with Greece’s National Guard. He reminded those present of the efforts former health minister Jenny Mikakos had made to bring a display from Greece’s prestigious National Archaeological Museum to Melburnians, which will finally come to fruition at the Melbourne Museum in April. He invited people to visit Open Horizons: Ancient Greek Journeys and Connections.

Hellenic Museum CEO Sarah Craig spoke of the museum’s goal to promote the “Hellenic story in its many forms, presenting its history from the ancient to the contemporary and sharing it with the diverse audience”.

There was plenty of diversity squeezed into the auditorium. Greek Consul General to Melbourne Emmanuel Kakavelakis was joined by members of other consulates from Lebanon, the Czech Republic, the Arabic Republic of Egypt, Italy, Romania and the United States.

Greek leaders and representatives of community organisations were also present among the guests, including Greek Community of Melbourne President Bill Papastergiadis and Tony Tsourdalakis, head of the Organising Committee for the Celebration of the National Anniversary.