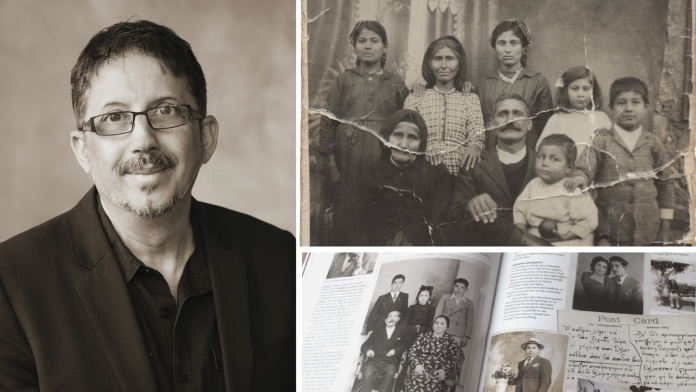 A project that started by Melbourne born and based author and artist Constantinos Emmanuelle as a means to preserve his family’s verbal stories and living memories turned into a Facebook Page and later on a book that celebrates the island’s pre 1950s era.

Through a series of 40 interviews and old family photographs of people who were born and raised on the island between 1900 and 1950 featured in his book ‘Tales of Cyprus: A tribute to a bygone era’ Emmanuelle aims to pay homage to his ancestral homeland and honour his parent’s generation.

“Like many Cypriot migrants my father, Miltiades Neofytou, arrived in Australia in early 1950 from Paphos, after the war, with 2 pounds in his pocket and no word of English seeking a better life.

“Three years later, he saw a photo of my mother, Panayiota, and decided to bring her over to Australia with the hope of marriage. It was an arranged marriage, which was very common at the time. I have to say they really made it work,” the author tells The Greek Herald.

“My parents’ generation is the last one that lived in poverty. They were living off the land without the comforts we have today, yet they were happy. This was the biggest lesson for me from this project. They had less but they were grateful.

“This made me more determined to find more people to interview and later on to create something traditional and tactile out of respect to that generation, thus the book” he explains.

Stories of resilience and determination

For his ‘Tales of Cyprus’ project Emmanuelle conducted a total of 120 interviews of Orthodox as well as Muslim Cypriots who live in Australia and Cyprus.

“Each story reveals a resilience towards defeat and a determination to survive against the odds and they are wonderful examples of how culture and tradition once underpinned the true Cypriot identity,” he says.

Asked why his book examines an era up to but not involving the Turkish invasion, Costa replies;

“I wanted to tell the other stories. The Turkish Cypriots, the Maronites and the Armenians and I’m glad that I did it. When my parents were growing up in Cyprus they co-existed with Muslims,” he says.

“There was a time in our history when we all lived like brothers and sisters and this is the important story.

“The Muslims and the Christians who lived on the island in the 20th century have every right to call Cyprus their home. It’s in their DNA the same ways it’s in mine.”

Now Emmanuelle is working on another project that he aims to exhibit next year in major Australian cities.

“It’s about a very important migrant ship, the Corsica or the ‘Greek Titanic’ as I call it.

“It left Cyprus in 1951, it took two months to come to Melbourne and on this ship were 800 Cypriots and I’m interviewing the passengers of the ship who talk about their horrendous experience on board,” reveals the author.