Greek flag flies first in the Tokyo Olympics: Here’s how to watch the opening ceremony 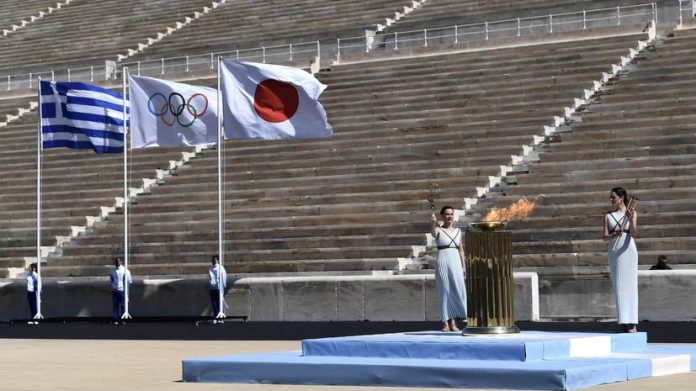 The day has finally arrived for those who’ve waited through a year of COVID-19 pandemic interruptions for the Olympic Games.

The 2021 Tokyo Olympic Games will kick off its opening ceremony at 9pm AEST tonight, Friday 23.

Greece’s national team will follow in the Olympic tradition of leading the parade of athletes in the opening ceremony and fly the blue-and-white flag in the closing ceremony.

The Olympic Hymn is a choral cantata composed by Greek opera composer Spyridon Samaras, with lyrics by the Greek poet Kostis Palamas.

Why does Greece lead the opening ceremony and why does the Greek flag fly during the closing ceremony?

The gestures displayed in the ceremonies acknowledge ancient Greece as the origin nation of the Olympic Games.

The ancient Olympic Games began at least 2,797 years ago in 776 BC and lasted until 393 AD in the UNESCO World Heritage site of ancient Olympia in the western Peloponnese area of Greece.

Where to watch the Tokyo Olympic Games in Australia:

The Tokyo Olympics will be broadcast in Australia on free-to-air TV on Channel Seven, 7two, and 7mate, as well as on steaming service 7Plus.

The Tokyo Olympics opening ceremony will start at 9:00 pm AEST on Friday, July 23, and run until about 1:00 am AEST on Saturday, July 24.

The closing ceremony will conclude the Games at 9:00pm Sunday, August 8, until 12:00am Monday, August 9.

Sydney, Brisbane, Melbourne, Canberra, and Hobart (AEST) are one-hour ahead of Tokyo (JST) so Australians won’t have to stay up late to watch most events.

Baseball and softball are also returning to the Olympics since being dropped after the 2008 Beijing Games.

Australia is competing in 33 sports at Tokyo, including all four new Olympic sports.