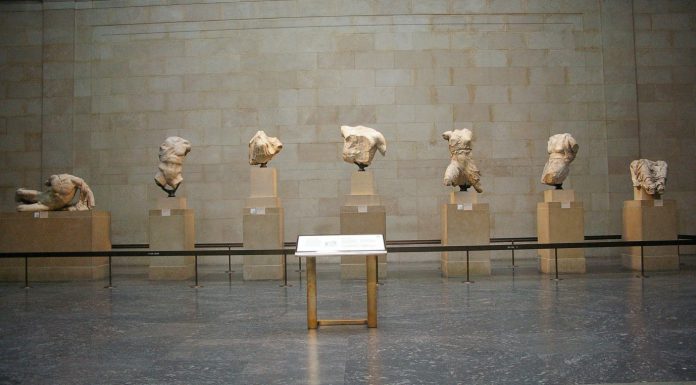 In recent days the Greek Culture Minister, Lina Mendoni, has re-asserted Greece’s longstanding demand for the return of the Parthenon Sculptures from the British Museum. The initial impetus for this reaffirmation of Greece’s commitment was the welcome re-opening of the Acropolis on May 19, as well as the upcoming 11th anniversary of the Acropolis Museum.

Mendoni invited the various international committees to renew in one voice their passionate support for the case of the return of the Marbles. Those expressions of support became a crescendo of neo-Philhellenism.

Australians for the Return of the Parthenon Sculptures, the Australian committee headed by David Hill, himself the inaugural and formerly long-term Chairman of the International Association for the Reunification of the Parthenon Sculptures, wrote a number of strong messages of support but also advised the Greek Culture Ministry that it needs to pursue a more direct strategy if the sculptures are ever to be reunited in the Acropolis Museum.

David Hill in his letter declared that it is a self-evident truth that the sculptures conceived by Phidias and erected on the Parthenon as an integral part of what is universally described as the ‘monument of all monuments,’ should be reunited in the Acropolis Museum so that they can finally be viewed and appreciated in their proper context.

“The full power and beauty and architectural context of the sculptures can only be properly understood if they are reunited with the surviving sculptures in Athens,” Hill said in his statement.

Elly Symons, the co-Vice Chair of the Australian committee, also implored the British Government to reunify the desecrated masterpiece, to right the historical and moral wrong, and rectify the grave injustice to all people who are robbed of seeing these peerless sculptures conceived in Greece, quarried in Pentelic marble and carved on the Acropolis to create the prized architecture of Western Civilisation, the Parthenon.

“These peerless beauties are alive only in Attic light and their reunification in Athens is an artistic, cultural and moral imperative,” Symons added.

For his part, George Vardas, also co-Vice Chair of the Australian committee, noted that at the re-opening of the Acropolis the President of the Hellenic Republic, Katerina Sakellaropoulou, adopted the words of the great Greek poet, George Seferis, that the Marbles shine in the sun under the Attic sky.

Vardas pointed out that the “historical imagination of the Parthenon and, in particular, the incomparable Panathenaic frieze, has been lost in a sterile, uninspiring display in the soulless Duveen Gallery of the British Museum.”

The Parthenon Sculptures: What happens now?

In their correspondence with the Greek Government, the Australian committee said: “Something needs to change radically if history is not to keep repeating itself. Repeated requests and pleas for the British Museum ‘to do the right thing’ have had no effect whatsoever.”

For decades the Board of Trustees have imperiously dismissed claims for return by pointing out that under the provisions of the British Museum Act 1963, the museum is presented for deaccessioning cultural objects in its collection. In turn, the British government typically responds that it is a matter for the museum trustees and, that by the way, the government has no intention of amending the legislation to allow for objects to be returned. As the Australian Committee advised Minister Mendoni, this is a “Cultural Catch 22” and the sad fact is that the British Museum continues to steadfastly refuse to discuss the issue of restitution of the sculptures, even at a time where there is a growing movement worldwide in support of the return of cultural artefacts looted during imperial times.

The Australian committee also reminded Mendoni that in 2015 the Greek Government had the benefit of detailed and considered legal advice from Geoffrey Robertson QC and his distinguished colleagues, Amal Clooney and the late Norman Palmer, which concluded that a universal benefit will flow from the renewal and re-integration of Greece’s pre-eminent monument, both as an artefact of unparalleled beauty in itself and as an eloquent symbol of human progress towards civilisation and democracy.

The British Museum’s enabling legislation has effectively locked up all domestic legal remedies by the strict prohibition on deaccessioning and as a result, Greece must look to international legal remedies and the most promising, and least problematic option, is to obtain an advisory opinion from the International Court of Justice.

That Court was established as the principal judicial organ of the United Nations and has the power to give advisory opinions in circumstances where the request is made by an official UN agency and the request is in respect of a legal question, in this case relating to the return of cultural property pursuant to the principles, both established and emerging, of customary international law.

This strategy forms one of the crucial elements of the Robertson legal advice and provides Greece with an excellent opportunity to engage in real and effective cultural diplomacy by enlisting the support of member states.

Cultural diplomacy is at the heart of the exercise of soft power. But it requires a steely resolve and nuanced negotiations, backed if necessary by resort to appropriate judicial remedies such as the advisory opinion route through the international courts.