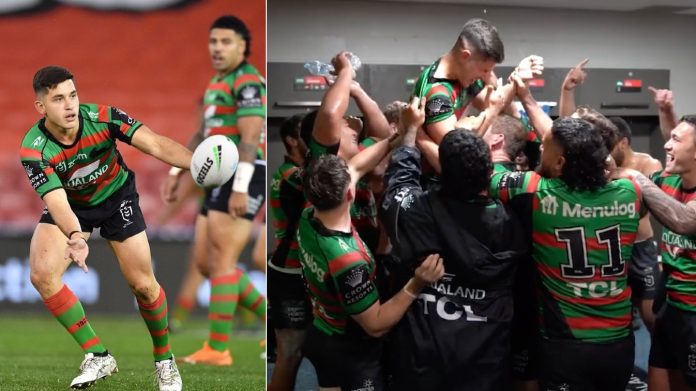 South Sydney Rabbitohs coach Wayne Bennett said a few days ago that youngsters Peter Mamouzelos and Blake Taaffe would become the “future of the club”.

On Friday, fans got a small glimpse into this very future, and the talents of both kids shone brighter than possibly even Bennett expected.

The Rabbitohs were missing a lot of big names in their dominant victory against the North Queensland Cowboys on Friday night. Most notably Latrell Mitchell and Damien Cook, who are preparing to face teammate Dane Gagai on the Origin stage on Wednesday.

Not that the missing players appeared to worry the Rabbitohs attacking force, with Milne, Johnston and Walker combining for one of the greatest trio of performances so far this season.

Without masterclass hooker Cook, the missing hole in the Bunnies pack was filled by Greek Australian Peter Mamouzelos, earning his first ever starting spot in the NRL – Making his debut off the bench against the Knights less than a month ago.

Anybody listening Andrew Voss’ commentary on Friday night would’ve heard the name ‘Mamouzelos’ ring about every 30 seconds. The reason: He was everywhere.

Mamouzelos had 64 running metres and managed 8 runs throughout the match. But the 20-year-olds biggest impact came in defence, making 25 tackles on the field – the third most tackles in the Rabbitohs squad behind Nicholls and Su’a, who both knocked up 26 tackles.

The Greek Australian played with more passion than I’d seen in a 20-year-old in a long time. And the best part was, he barely put a foot wrong the whole match.

Not even looking at the youngsters stats and focusing on his on-field highlights, Mamouzelos got his side two six again calls, challenged the strength of one of the NRL’s toughest forwards in Jason Taumalolo, and provided the bursts of energy needed to stop multiple Cowboys attacks and shift the tide towards the Rabbitohs favour.

He even copped a nasty head-high whack from Heilum Luki, which saw the Cowboys player get sent of for 10 in the bin.

It’s not to say the youngster didn’t have any room for improvement, he is only 20-years-old and still has plenty to learn from his more experienced teammates. However, the level of involvement with, and without, the ball showed Mamouzelos has the potential to reach Cook’s expertise.

While Bennett failed to mention them in his post match press conference, Mamouzelos and Taaffe, who earned his first-ever NRL try, would have certainly impressed the experienced coach.

Mamouzelos and Taaffe, alongside fellow Greek Australian Lachlan Ilias, have been described previously as “best mates” by Mark Ellison, Head of Football at South Sydney.

“(Thy are) inseparable at training and outside of footy, and they have similarly strong combinations on the field as well having played and trained alongside each other for the past three years,” Ellison said.

Mamouzelos joined from the Maroubra Lions and has been a mainstay in the Rabbitohs’ Jersey Flegg side throughout 2019 and 2021. He has represented Greece in seven matches including World Cup Qualifiers throughout 2018 and 2019.