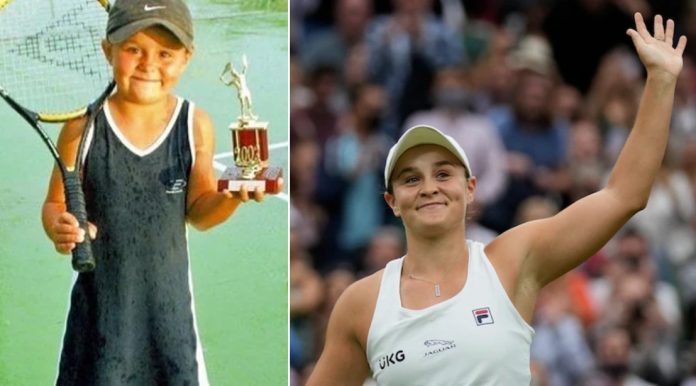 On Saturday night, all Australians will be cheering on World No. 1 Ash Barty as she takes on Karolína Plíšková to claim her second career Grand Slam.

After her semi-final victory, she became the first Australian woman to reach the final since her idol and mentor Evonne Goolagong Cawley won her second Wimbledon title in 1980.

“Ash is a very proud Indigenous woman and she’s been very open that Evonne Goolagong Cawley is her role model and an icon for her,” she said.

“I can absolutely assure you we’ll be laying everything out for Ash when she gets [home].”

She is wearing a specially designed dress in tribute to the iconic scallop outfit Cawley wore that day.

“I couldn’t be more proud to be in a position to wear an outfit inspired by her. Now to kind of give myself a chance to create some history almost in a way that’s a tribute to her is really exciting.”

Win or lose Barty will extend her gap ahead of Naomi Osaka atop the women’s rankings — a win that would see her move a whopping 2,299 points clear.

Also win or lose, she will claim a place in the heart of all Australians, as the humble tennis player looks to turn into one of the nations greatest national treasures.

“Being able to play on the final Saturday here at Wimbledon is gonna be just the best experience ever!” Barty said.

“I’m incredibly proud of myself and my team and now we get a chance on Saturday to live out a childhood dream.”

“I’m excited I could repay them the favour in a way, of giving us an opportunity as a collective, as a whole, to do something pretty special this week.”

The match will be broadcast on Channel 9 and streamed on Stan Sport at 11:00pm Saturday in the eastern states of Australia, 10:30pm in the central time zone and 9:00pm in the west.

Share
Facebook
Email
Twitter
Pinterest
Linkedin
WhatsApp
Viber
Print
Previous articlePeter Mamouzelos always had the heart – Last night he showed the talent
Next articleInsight or Perspective: What makes us Greek and how ‘Greek’ is your DNA?