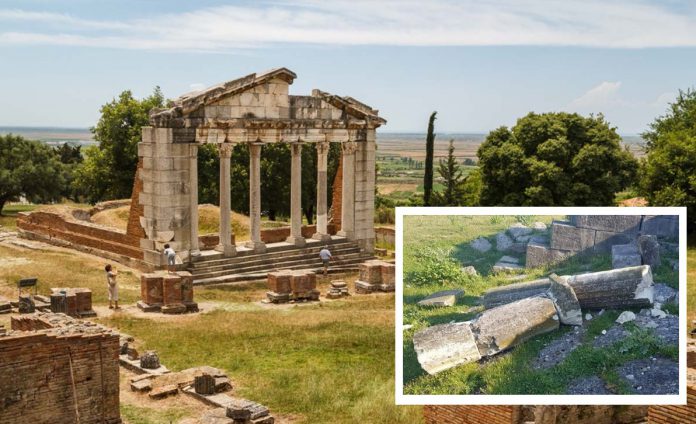 Unknown vandals in Albania have caused “irreparable” damage to a monument in ancient Apollonia near the town of Fieri, Albanian authorities announced over the weekend.

The director of the archaeological site was quoted as saying that “the damage is irreparable,” as ancient marble columns at the nymphaion of the site were broken. The nymphaion, in ancient Greece, was a monument consecrated to the nymphs, especially those of springs.

The President of Albania, Ilir Meta, has condemned the act and called it barbaric.

According to Albanian authorities, the act of vandalism must have occurred during the lockdown caused by the coronavirus pandemic but it was only recently discovered.

Approval has been given by the Albanian Ministry of Culture to try and restore the Ancient Greek monument.

Apollonia was founded in 588 BC by Greek colonists from Corfu and Corinth on a site where native Illyrian tribes lived and was perhaps the most important of the several classical towns known as Apollonia.

It was a self-governing and independent city for many centuries until it was first incorporated into the Kingdom of Epirus and later, the Kingdom of Macedonia. It was a very well-governed city and flourished because of its rich agricultural hinterland and its role in the slave trade.

Apollonia flourished in the Roman period and was home to a renowned school of philosophy, but began to decline in the 3rd century AD when its harbor started silting up as a result of an earthquake. It was abandoned by the end of Late Antiquity.

Share
Facebook
Email
Twitter
Pinterest
Linkedin
WhatsApp
Viber
Print
Previous articleGreek PM: My message to you is very simple. Come to Greece.
Next articleTsitsipas crushes Paire to close out day one of the Ultimate Tennis Showdown