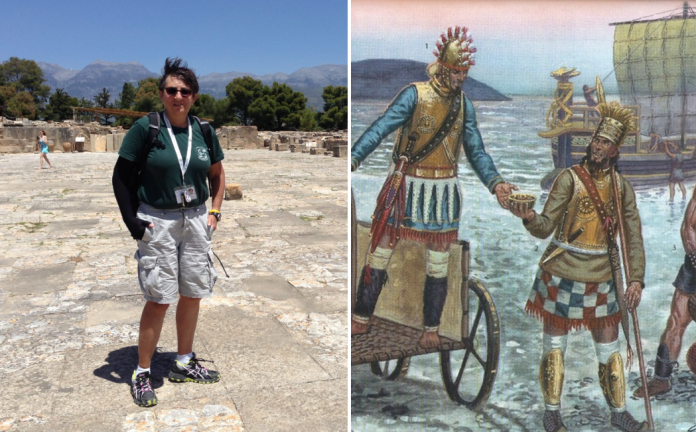 The Greek Community of Melbourne’s Greek History and Culture Public Seminar Series, which was suspended due to COVID-19, will resume on June 25 with a special lecture by Professor Louise Hitchcock.

Professor Hitchcock, who is an expert of Aegean Bronze Age Archaeology at the University of Melbourne, will present a lecture entitled ‘What the Covid-19 Pandemic Can Tell Us About the Bronze Age (12th cent) Collapse in Greece‘ to kickstart the seminar series, which has been running for ten consecutive years.

The aim of the talk is to re-examine theories of events and mythologies surrounding the end of the Bronze Age in the Mediterranean, which resulted in collapse, depopulation in Greece and the destruction of the Mycenaean civilisation as well as of many sites around the Mediterranean.

The seminar will be broadcast from 7pm via the video-conferencing platform Zoom and streamed on the Community’s Facebook and YouTube channels.

The once popular Dorian invasion of Greece from the north, which is found in older books, is largely dismissed nowadays by scholars as an Aryan fantasy. Plague, climate change, famine and earthquakes are other proposed causes for the end of the Bronze Age. In the past, such proposals have been difficult to accept as drivers of destruction as it might indicate that people were too sick or hungry to destroy cities. Thus, events like plague or famine were seen as unable to account for destruction or for the appearance of new forms of weaponry including the Naue II or cut and thrust sword, the Perstosa Italian dagger, and the socketed spear, followed by the appearance of iron weaponry. The destructions and these new weapons could only result from human agency.

It will be suggested in this lecture that observations of the social and economic effects of the coronavirus pandemic can provide us with a more nuanced understanding of the way social breakdown caused by pandemic might have contributed to creating an opportunity for military action by non-state actors including a dissatisfied rural population as well as the so-called Sea People, known from Egyptian records as well as from Old Testament accounts of the Philistines.

Louise Hitchcock is Professor of Aegean Bronze Age Archaeology in the Classics and Archaeology Program at the University of Melbourne. She is the author of Minoan Architecture: A Contextual Analysis, Theory for Classics, Aegean Art and Architecture (co-authored with Donald Preziosi), and is the co-editor of DAIS: The Aegean Feast, Aegaeum 29 and of the Festschrift for Aren Maeir, as well as the author of over 90 articles dealing with Aegean, Cypriot, and Philistine archaeology, architecture, theory, gender, and space.

Her current research is engaged with architecture, piracy, Aegean, Cypriot, and Philistine identities, interconnections and entanglements. She has done fieldwork in California, Cyprus, Crete, Egypt, Greece, and Syria.

The Australian Research Council and INSTAP has funded her recent excavations at the Philistine site of Tell es-Safi/Gath, where she was an area supervisor. She also directed the Vapheio-Palaiopyrgi Survey Project in Laconia. She has also been awarded multiple competitive fellowships including a Fulbright and National Endowment for the Humanities.