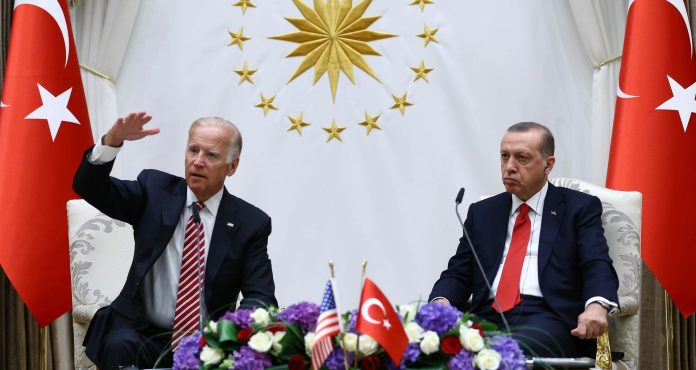 Ten Greek American and Cypriot American organisations have sent a letter to US President Joe Biden ahead of the anniversary of Turkey’s invasion of the Mediterranean island to express their concern over the “new and renewed existential threats” posed by Turkish President Recep Tayyip Erdogan.

The letter, which was republished by Ekatherimini, shows the organisations draw attention to Erdogan’s recent decision to reopen Varosha, a beach resort abandoned by Greek Cypriots fleeing Turkey’s invasion in 1974.

The organisations point out that Biden is in a “unique position” to make Cyprus a higher policy priority in American foreign policy. They request that the President demands that the United Nations assert its jurisdiction over Varosha.

Read the full letter below

On October 6, 2020, Turkey re-opened the beach in Varosha, the fenced-in area of the territory of the Republic of Cyprus which Turkey has occupied since it unlawfully invaded the Republic of Cyprus in 1974. This action violates United Nations resolutions and international treaties to which the US and Turkey are signatories. In particular, Turkey is in direct violation of UN Security Council resolutions 550 (1984) and 789 (1992) that address the transfer of this area to the United Nations and the 1979 High Level Agreement between the Greek Cypriot and the Turkish Cypriot communities that stated that priority should be given to the resettlement of Famagusta, of which Varosha is a subdivision, under UN auspices. During the past year, President Erdogan and Turkish Cypriot leader Ersin Tatar have spoken openly about their support of a “two-state” solution regarding Cyprus–the permanent partition of the island. As such, President Erdogan’s attempt to change Varosha’s status demonstrates a lack of interest in resuming serious settlement talks in favor of pursuing tangible steps to advance a “two-state” solution regarding Cyprus, which contravenes the positions of the United Nations and the US government.

In addition, Turkey’s actions violate a European Parliament Written Declaration in 2012, which called on the government of Turkey to act according to UN Security Council Resolutions and previous European Parliament Legislative Committee reports and return the Famagusta sealed-off section to its lawful inhabitants.

Moreover, the US government has previously reaffirmed its support by endorsing the Statement by the President of the United Nations Security Council on October 9, 2020, calling for “the reversal” of Turkey’s actions vis-a-vis Varosha. However, Turkey has not reversed its actions regarding Varosha. Therefore, mere rhetoric or criticism of Turkey no longer suffices. Substantive action needs to be taken immediately. UN Security Council resolution 550 (1984) explicitly states that an effort to change the status of Varosha necessitates the transfer of the area to the administration of the United Nations. To that effect, we urge your Administration to call upon the United Nations to enforce UN Security Council resolution 550, in which Varosha would be under the U.N. control.

According to press reports, President Erdogan will visit Varosha this July 20 and purportedly make further announcements about its status. It is essential for the United States government and the international community to be proactive and head off any further illegal actions of Turkish expansionism against Cyprus. A failure to act will only embolden President Erdogan in his pursuit of a “two-state” solution regarding Cyprus, which would be a disaster for the people of Cyprus and would not be in the United States’ best interests. It would constitute an egregious violation of the rule of law and fundamental principles of the United States and the international community.

In many ways, President Erdogan’s efforts to change the status of Varosha in furtherance of a “two-state” solution poses as dire a threat to Cyprus’ sovereignty as Turkey’s invasion of Cyprus in 1974. When Turkey invaded Cyprus in 1974, Secretary Henry Kissinger refused to take actions that potentially could have remedied the crisis due to a desire to appease Turkey. The Congress, with the support of Senators such as yourself, imposed an arms embargo on Turkey in February 1975 over the objections of Secretary Kissinger. The US government must not engage in the same diplomatic malpractice regarding Cyprus as it did in 1974.

On January 27, 1989, as a United States Senator, you wrote a letter to a Greek American leader from Delaware, Dr Dean Lomis, then-Chairman of the American Hellenic Institute (AHI), stating: “… we must urge the new Administration [President George H.W. Bush] to make Cyprus a higher policy priority in American foreign policy … We cannot lose sight of the fact that the rights of Greek Cypriots have been trampled upon, and we must ensure that their claims to ancestral land and property seized during the 1974 invasion are not compromised. Finally, we must send a signal to Turkey that until it has removed every last soldier from Cyprus, it will never be recognized as a full member of the international community.”

For decades, you have been a staunch advocate for a Cyprus whole, free, and at peace. As President of the United States, you are in a unique position to make Cyprus a higher policy priority in American foreign policy, as you have previously stated. Therefore, we urge you to warn President Erdogan against further aggression toward Cyprus and to send a clear message that Turkey will face punitive and dire consequences if further actions toward the Republic of Cyprus are pursued that threaten its sovereignty and cause instability. In addition, we respectfully request that you direct the US government to demand that the United Nations assert its jurisdiction over Varosha.

Dr James F. Dimitriou, President & Chairman of the Board of Directors American Hellenic Council of California.