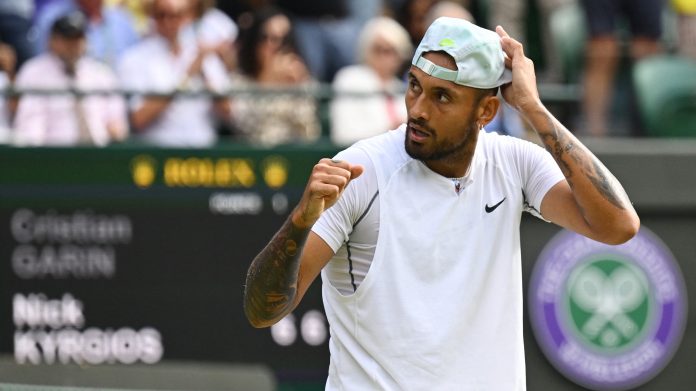 Nick Kyrgios will face Rafael Nadal in the Wimbledon semi-finals after defeated the Chilean, Cristian Garin, in straight sets 6-4 6-3 7(7)-6(5) on Wednesday night.

The 27-year-old was on course at the start of Wednesday’s match as Garin claimed nine points earlier. But the Aussie bounced back to level 3-3 and grabbed the opening set in the 10th game.

Kyrgios did well in the second set and finished with his 10th ace of the competition. Garin later ran into a brick wall as the Australian saved eight of nine break points during the match.

“I never thought I would reach the semi-finals of a Grand Slam. I thought the ship had sailed, that I wasted that little window in my career,” Kyrgios said in a post-match interview.

“I’m really happy that I was able to come here with my team and be able to perform.”

The victory comes as Kyrgios has been the subject of controversy throughout the entire tournament.

Kyrgios was fined for spitting in his first round match and later was docked $5,872 for his obscene language during his fiery match against Greece’s Stefanos Tsitsipas.

On Wednesday, it also emerged that Kyrgios has been summoned and is listed to appear at the ACT Magistrates Court on August 2 following an allegation of common assault against former girlfriend, Chiara Passari, in December last year.

When asked about this at the post-match conference, Kyrgios said while he couldn’t talk about the charge for legal reasons, it stilled played on his mind prior to his Wimbledon match against Garin.

“It was hard. It was hard to kind of just focus on kind of the mission at hand. It was quarterfinals of Wimbledon today. I know deep down that’s what I was prepared for,” he added.

“It didn’t really affect my preparation at all. I knew I stayed true to myself and give my best performance today.”

Kyrgios will now face No. 2 seed Rafael Nadal in the Wimbledon semi-final on Friday.

This morning, Nadal said it was impossible to predict if he would play Kyrgios on centre court on Friday.

“I don’t know,” Nadal said. “Tomorrow I’m going to have some more tests. But difficult to know.”