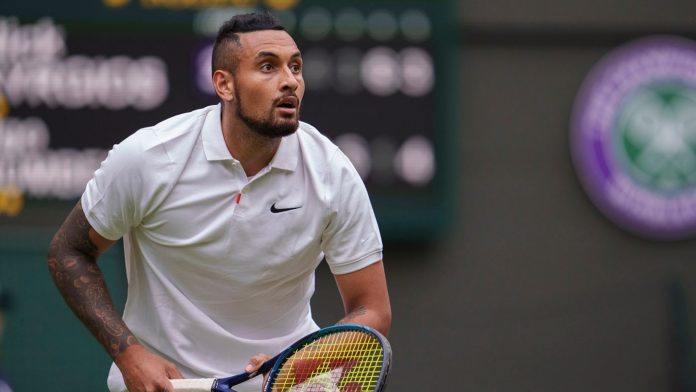 Nick Kyrgios will still chase a career-best grand slam semi-final at Wimbledon tonight despite confirmation he will face court in Canberra next month.

Kyrgios has been summoned and is listed to appear at the ACT Magistrates Court on August 2 following an allegation of common assault against former girlfriend, Chiara Passari, in December last year.

On conviction, the charge carries a maximum jail sentence of two years.

Kyrgios made no comment on the allegations when approached by media as he left practice at Wimbledon yesterday.

Tournament organisers have declined to comment on the allegations, citing legal proceedings, but yesterday confirmed the 27-year-old remains scheduled to meet Chilean Cristian Garin for his quarter-final this evening.

“We are in touch with Nick’s team and he remains scheduled to play his quarter-final match tomorrow,” an All England Club spokesperson said.

While details of the assault allegations are not known, Kyrgios’ barrister Jason Moffett has confirmed he has been briefed in the matter and that the tennis star is aware of the charge.

“It’s in the context of a domestic relationship,” Moffett told The Canberra Times.

“The nature of the allegation is serious and Mr Kyrgios takes the allegation very seriously. Given the matter is before the court … he doesn’t have a comment at this stage, but in the fullness of time we’ll issue a media release.”

Ranked no. 40 in the world, Kyrgios’ on-court clash against Garin today will be his third trip to a singles quarter-final at a grand slam tournament, but he is yet to progress beyond that stage in a career that has taken him as high as world no.13.