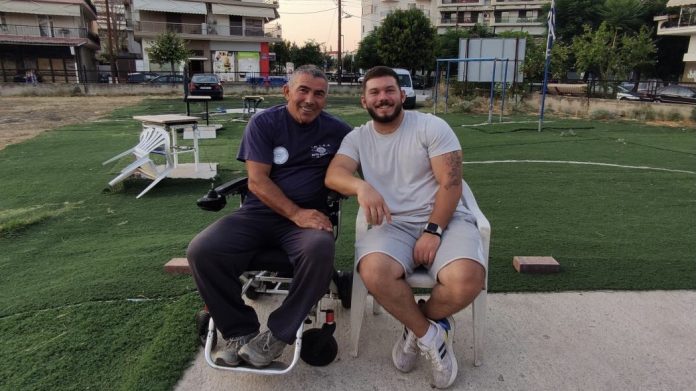 Lazaros and Leontios Stefanidis are currently representing Greece in the shot-put events at the Paralympic Games in Tokyo.

It marks their Paralympic debut and pins the pair, as the current competition’s only father and son duo, against each other.

“I am proud that I will compete with my father at the Paralympics and that we will go together to the Games. I feel blessed that we will be together,” Leontios, 22, is quoted in World Para Athletics.

He says his father Lazaros inspired him to get into athletics.

“[He taught me to] never give up because the human strengths can reach unknown barriers and you can reach points that you never imagined,” he says.

“So you always have to try and you will be awarded with good results.”

His father Lazaros, 64, is the founder of the AS Lazaros Stefanidis O Makedonas athletics club in Thessaloniki.

Lazaros has competed in three World Para Athletics Championships before qualifying for the Paralympics and says it isn’t the first time he’s been pinned against his son.

“I finished fourth in the Europeans and my son finished fifth,” he says.

“There is no better feeling to compete together with your child.”

“He has been with us [in competitions] since he was a baby.”

“He has trained since he was 12 in all throw disciplines, but he chose shot put and I hope he will stay healthy and be a very successful Paralympic athlete.”

“I believe we will see extraordinary things at the Paralympics.”

“I have seen all his path developing as an athlete, so I feel very special.”

You can watch Leontios and Lazaros in the men’s shot-put F20 and F33 events on 31 Aug and 4 Sep, respectively.