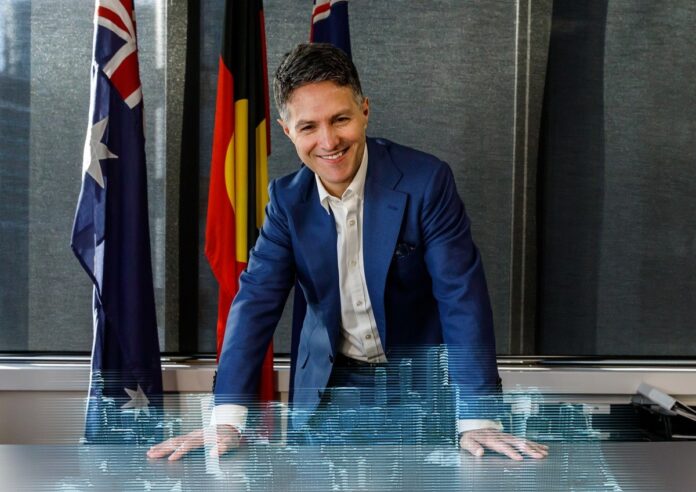 Growing up on a farm with migrant grandparents, Victor Dominello knows all too well how traditional the elderly migrant generation can be.

As the world enters a new era of technological development, particularly an era that has seen a greater introduction of health information technology, it has forced citizens to become technologically ‘savvy’.

Minister for Customer Service and MP for Ryde, Victor Michael Dominello, spoke with The Greek Herald about his encouragement for the elderly generation to join the constantly evolving world of technology.

Mr Dominello shared the many ways that he has seen technology change people’s lives, along with the difficulties in getting them to trust it.

“A 77 year old lady had a button in her arm and that’s measuring her glucose levels,” Dominello said to The Greek Herald.

“She proudly showed me her smartphone, and she wouldn’t have a clue about technology, but she knows that it’s measuring her blood sugar levels, it goes off and has alarms, and was telling me how much it’s changed her life.”

It’s not just diabetes that these kinds of e-health technologies will be assisting however, but dementia, Alzheimer’s and Parkinson’s as well.

“All the things that require measurement, internally, is going to be really big in the next 5-10 years. There will be an ambulance at your door and you’ll say why, then you’ll realise it’s because it was triggered without your knowledge of the issue.

“Your readers are going to be increasingly relying on tele-health and e-health services.” Dominello said.

“They’re going to be getting more medical treatments at home. They are going to be having devices, whether it’s a smart watch or smart ring, but health benefits for the elderly will be at the cutting edge.”

While new ground-breaking technology continues to be developed, the struggle, Dominello claims, is convincing the older generation to use it. The MP claims that this task is largely left in the hands of their children and grandchildren.

“In many ways this generation is still in the twilight zone, it’s the next one coming through that is going to be completely digitally immersed,” Dominello said.

“We have a duty to make sure we help our parents out, so I’m trying to do the same with my mum.

“If they had it their way, they’re just creatures of habit they’d go back into routine. But the world is changing too fast they can’t just do that all the time.”

As Minister for Customer Service, it is Dominello’s job to make sure that all businesses are digitally well equipped. Recognising cyber security as a massive issue in a ‘post-covid world’, Dominello revealed his intentions to make that a high priority for businesses.

“Not everyone can afford spending a million dollars on consultants,” Dominello said.

“If we can create a place where they can go, so they can just get off the shelf products to help them get on their feet.

“What we need are assistants out there to declutter all the noise and separate the real news from the fake news.”

The Customer Service Minister called on the government to not so much get bigger but get “smarter” and “help people through the journey”.

“That’s why service has a big role to play in stepping up for small businesses, because the big ones will always be okay, but it’s the small ones that will struggle.”

According to Dominello, Victoria represents about 25% of Australia’s economy, with NSW represents about 30%. However, following Victoria’s dire situation under stage 4 restrictions, Dominello expects the gap between the 25 and the 30 to greatly extend.

“We (NSW) can’t afford to go into lockdown, so we’ll do everything in our power to make sure that doesn’t happen.”

Formerly the minister for multiculturalism for four years, Mr Dominello enjoyed being able to reconnect with his culture and heritage. Something he, admittedly, didn’t engage strongly in when he was younger.

“Hold on to your culture as much as you can,” Dominello concluded.

“Unfortunately I didn’t learn Italian, and during Covid everyone goes back to practice home cooking and it’s just a time to reflect on who you are and how important that is in terms of your identity.

“It’s very easy to be part of a bigger crowd and get lost, so hold on to the culture for as long as you can.”