Greek language students recognised for excellence at University of Sydney 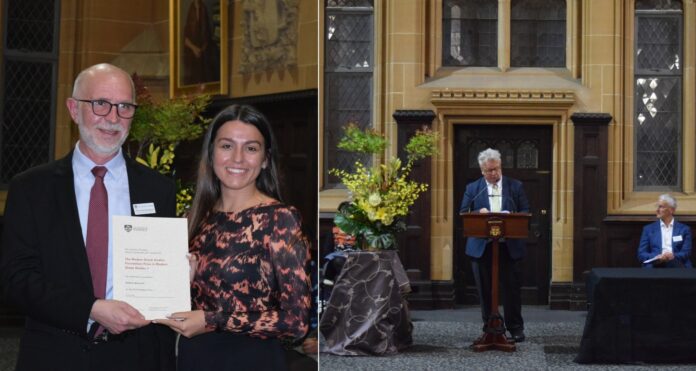 It was a day of celebration for all languages, including Greek, as students received awards for excelling in the University of Sydney’s School of Languages and Cultures.

Awards were presented to students who excelled in their respective language courses in either 2019 or 2020, due to last year’s ceremony being cancelled from the COVID-19 pandemic.

The ceremony was opened by Professor Annamarie Jagose, Dean for the Faculty of Arts and Social Sciences, and Professor Yixu Lu, Head of School for School of Languages and Cultures.

Professor Vrasidas Karalis, Sir Nicholas Laurantus Professor of Modern Greek, was MC for the ceremony, saying the night was to celebrate the “achievements and efforts of these hard working students.”

“(The students’) presence, even through the black windows of their zoom screens, gave us hope that things would change soon,” Professor Karalis said.

Associate Professor Anthony Dracopoulos presented eight categories of Greek language awards, with six of these categories including students from 2019 and 2020.

Elefteria Antonelli and Katherine Lambros received the 2020 and 2019 GS Caird Scholarship in Second Year Modern Greek for their respective years. The award is presented annually to the student who shows greatest proficiency in second year units and who subsequently proceeds to third year Modern Greek.

Speaking to The Greek Herald, Katherine Lambros, who was the Sydney University Greek Society President in 2020, said she felt “really proud” to be acknowledged for her study efforts.

“I also just really like to contribute to the continuation of the Greek department,” Lambros said.

“I think it’s really important students of Greek background continue their study of Greek and support the department so it can continue into the future.”

Lambros added that it’s very important Greeks continue the connection they have with their heritage, “even if it’s doing a beginner subject or more advanced subject, I think anyone can get anything out of it.

The next award was presented to Marina Dionysiou, who received the 2019 GS Caird Scholarship in Third Year Modern Greek.

The third award was the Order of the Australian Hellenic Education Progressive Association Scholarship in Modern Greek, which is presented to a high-excelling first year student who proceeds to senior units of study. This award was received by Jamie Christoforou and Harry Varvaressos for 2020 and 2019 respectively.

Harry Varvaressos said it was a “great honour” to receive the award on the night.

The Robert William Henderson Memorial Prize is presented to any student who has shown a deep interest in Modern Greek Culture in their senior years, and was presented to Fereniki Ghelis and Nicholas Varvaressos.

See below for the list of award winners for this category:

Elefteria Antonelli, who received two awards on the night, said receiving the award was a “huge privilege”.

“(Greek) is a way not only to talk to your grandparents, but also something I want to pass down to my kids when the time comes,” Antonelli said to The Greek Herald.

The final award was recently introduced in 2020 by the Sydney University Greek Society and honours the outstanding commitment to the Department and its students by Professor Vrasidas Karalis and Associate Professor Anthony Dracopoulos. The inaugural recipient of the award was Stefanos Stavropoulos.