Insights or Perspectives: ‘Can you consider yourself Greek if you don’t speak the language?’ 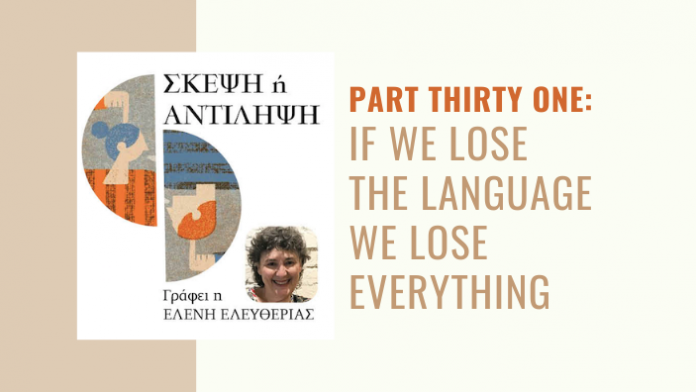 Following on from last week’s column on what makes us Greek, I would like to present my view. What is the point of considering oneself Greek if you can’t speak the language?

It is a unique, beautiful, lyrical language that opens your mind and fills your heart with treasures you can never imagine unless you can understand it.

Though many poets have been translated to English, very successfully, such as the poetry of Constantine Cavafy, it is always better in the original.

Speaking of Constantine Cavafy, he was a Greek born in Egypt who spent time in England and yet he wrote in Greek and became of Greece’s most celebrated poets and one of the top selling poets worldwide. Another interesting fact is that he only visited Greece twice in all his life and for a total period of one month.

Therefore, you see, you do not need to be born in Greece to be Greek. You need to practice ‘the art of being Greek’. That intellectual spark that can start a fire within you, a great love of the language that can lead to so much more.

A deeper understanding of philosophy, religion, the arts, science, even life itself.

Most European languages have borrowed heavily from Greek but Greek has also gobbled up many ancient dialects, many languages that do not exist anymore.