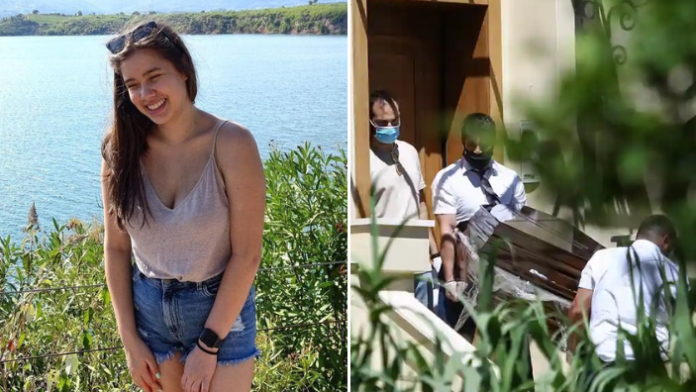 The Greek government has offered a €300,000 reward to try to track down the culprits behind the murder of a British-born student in her suburban Athens home.

The reward was publicised hours after Caroline Crouch, 20, was strangled in front of her baby daughter by armed burglars who had bound her husband, Babis Anagnostopoulos, to a chair after breaking in. The intruders also killed the family’s dog, leaving it hanging from a banister in the house.

Greece’s citizens’ protection minister said the county was reeling from the crime. “We are all shaken up and personally I am shaken up,” Michalis Chrisochoidis told the annual Delphi Economic Forum on Tuesday. “We rarely encounter such brutality in Greece, both in Greek society and in crime.”

Crouch is believed to have been tortured for up to an hour as the thieves tried to coerce her into revealing the location of thousands of pounds of cash and jewellery, which they then made off with. They are believed to have taken €15,000 hidden in a board game.

Greek media reported that Anagnostopoulos, a helicopter pilot, 32, had been forced to listen as his wife cried for help, before he managed to set himself free and alert authorities.

The raid took place at about 4.30am when three masked men broke into the house while another stood outside guarding the building.

“We had bought a plot of land and had money in the house for initial works. I heard my wife, who was tied up in the bed, constantly shouting for help. We begged them not to do us any harm,” the news portal, Newsit, quoted Anagnostopoulos as telling police.

Crouch, the daughter of a British couple who had moved to the Greek island of Alonissos when she was an infant, was sleeping with her 11-month-old baby in an attic area when the thieves broke in. One police officer said there were signs Crouch “had put up resistance”.

Greek authorities said distraught relatives, including her parents, were being given psychosocial support. Her mother is believed to work in the tourism industry on Alonissos.

Two specialist police units have been seconded to investigate the crime and were concentrating on CCTV footage in the belief that the culprits had followed the couple for several days.

The bounty is highly unusual in Greece – according to the broadcaster ERT there have only ever been four previously, in cases of terrorism or to catch hardened criminals.

The reward was outlined in a ministerial decision co-signed by Chrisochoidis and the deputy finance minister, Theodoros Skylakakis; an announcement said €300,000 would be given “to anyone who hands over data and information to the relevant authorities that will lead … to the arrest of the culprits”.

*Sourced by: The Guardian