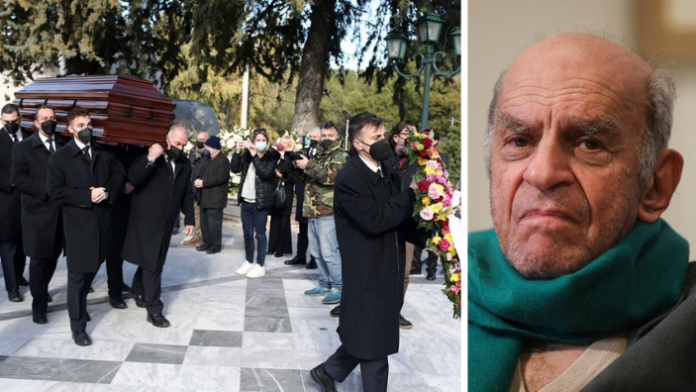 The funeral for renowned Greek painter, Alekos Fassianos, who died on Sunday at the age of 87 after a long illness, was held in the Papagou cemetery in Athens on Tuesday.

“The public’s unexpected love for Alekos Fassianos is proof that despite the difficult times we are experiencing, we still have good feelings inside us,” Alekos’ widow, Mariza Fassianou, said at the funeral while thanking those who have expressed their support for the family.

Among those in attendance at the funeral were Prime Minister Kyriakos Mitsotakis, Culture Minister Lina Mendoni, as well as friends and colleagues of the painter.

“All the work of Fassianos, the colours that filled his canvases, the multidimensional forms that dominated his paintings, exude Greece,” Culture Minister Lina Mendoni said in a tribute following his death.

“Greece no longer has with it a great artist who lavished colour on its daily life,” the Prime Minister added.

Fassianos has been described by some as Greece’s Picasso and was a graduate of the Athens Academy of Fine Arts. He moved to Paris in 1960 to study lithography at the Ecole des Beaux-Arts.

He adopted a personal anthropocentric style, influenced by abstract art. Many of his works adorn public spaces, including a mural at an Athens subway station.