Greek communities across Australia celebrate the traditional Blessing of the Waters 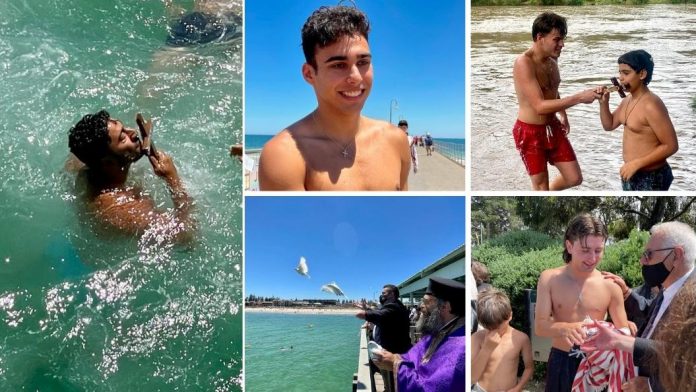 The traditional Blessing of the Waters was held in South Australia, the Australian Capital Territory and Tasmania over the weekend to much joy from the parishioners who attended.

Here’s our list of all the winners and events which were held in those states and territories:

On Sunday, January 9, 2022, the Blessing of the Waters ceremony took place at Glenelg Jetty for the 42nd successive year.

His Grace Bishop Silouan of Sinope, together with Adelaide’s Orthodox Christian clergy, led a procession onto the Glenelg Jetty for the annual event.

In attendance were a number of prominent dignitaries including the Minister for Trade and Investment, Stephen Patterson, representing SA Premier Steven Marshall; the Mayor of Holdfast Bay, Amanda Wilson; Tom Koutsantonis MP; Andrea Michaels MP; the Chair of SAMEAC, Adriana Chrisopoulos; and the President of the Inter-communities Council of SA, Dr Vladimir Devrelis.

They all watched in excitement as many swimmers, young and old, endeavoured to be the first to retrieve the Holy Cross which was thrown into the sea from the jetty.

Ultimately, Stelios Zacharakis (Στέλιος Ζαχαράκης), 20, who is in his second year at university studying dentistry, retrieved the Holy Cross. Stelios is from the Parish of Prophet Elias, Norwood and this year was the third time he dived for the cross.

“I feel very lucky and happy,” Stelios told The Greek Herald and encouraged more people to participate next year.

“Go for it. This is my third year. Third year is the charm. It’s all about life really.”

This Blessing of the Waters ceremony was followed by the traditional Glenelg Greek Festival which, for the first time this year, has taken place over two days on Saturday, January 8 and Sunday, January 9 at the grassed foreshore area in front of the Stamford Grand Hotel.

The Greek Orthodox Community of SA (GOCSA) honoured Epiphany in a scaled down Blessing of the Waters event held at the Henley Beach Jetty on Sunday midday.

The Community cancelled this year’s festival due to the increasing COVID cases in the state.

“It is our duty to protect the community. Health and wellbeing come first and we’ll gather next year to celebrate with a bigger event,” GOCSA President, Bill Gonis said in his speech.

Nine people in total -among them two girls- dived for the Cross with first timer Hristos Likouras (Χρήστος Λικούρας), 30, being the winner.

“I feel overwhelmed,” he told The Greek Herald. “When I woke up this morning, I never thought I would retrieve the Cross but I tried regardless. If you have highs and lows in life just try and get through each day.”

Canberra’s Greek community gathered together at Casuarina Sands on Sunday, January 9 to celebrate the annual Blessing of the Waters.

The event, which was organised by the Greek Orthodox Community and Church of Canberra (GOCCC), began with a Matins and Divine Liturgy service at the local St Nicholas Greek Orthodox Church.

The liturgy was presided over by the Archepiscopal Vicar of Canberra His Grace Bishop Bartholomew of Charioupolis, with the assistance of parish priest, Father Petros Kipouros.

During a sermon, His Grace emphasised the importance of mirroring one’s life on St John by loving and trusting God and not being afraid to express one’s Orthodox Christian faith.

After the service, Bishop Bartholomew and the parishioners travelled to Casuarina Sands to witness the throwing of the Holy Cross into the water as swimmers attempted to retrieve it.

In the end, Emmanuel Papanikolaou, 18, who’s heritage is from Samos, was named the winner.

“It’s a good day out with the community and it’s really fun. I’m just glad it could go ahead because I thought it would get cancelled due to COVID-19. So I’m really happy.”

The Greek community of Tasmania also held the traditional Blessing of the Waters at Sandy Bay Beach on Sunday, January 9.

Following a Divine Liturgy service, parishioners went down to the beach area and cheered as swimmers jumped in to retrieve the Holy Cross from the water.

20-year-old Yiannis Anagnostis from Hobart successfully retrieved the cross this year after many years of entering the race.