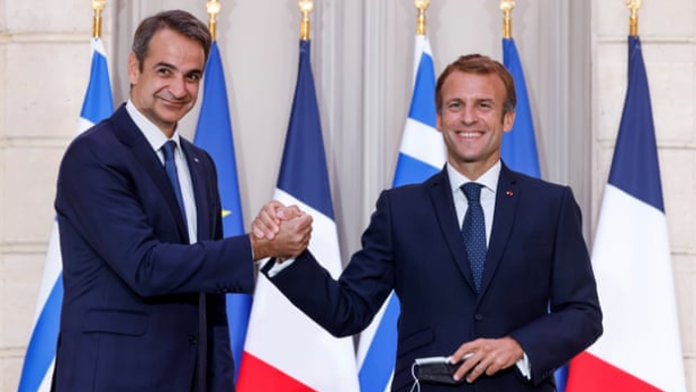 France and Greece on Tuesday announced a defense deal worth around 3 billion euros ($3.5 billion), including Athens’ decision to buy three French warships as part of a strategy to boost its defense capacities in the Eastern Mediterranean amid recurring tensions with longtime foe Turkey.

“This partnership expresses our will to increase and intensify our cooperation in the defense and security sector based on our mutual interests,” Macron said. It will “help protect the sovereignty, independence, territorial integrity of both states.”

Greece will purchase three French frigates to be built by defense contractor Naval Group in Lorient, in western France. The deal includes an option for the acquisition of a fourth frigate.

The agreement also stipulates that one country with come to the aid of the other in the event of an attack.

Mitsotakis said it comes “out of national motivation to shield our country,” but also has “a European motive as it strengthens our common defense industry.”

“Greece and France are today taking a bold first step towards European strategic autonomy,” he added, saying it’s paving the way towards “a Europe that … will be able to defend (its interests) in the wider region, in the eastern Mediterranean, in the Middle East.”

When asked whether this deal risked raising tensions in the eastern Mediterranean, Macron said the accord did not target a country specifically, but Greece, as the outer border of the European Union needed to be protected.

In response to the deal, Greece’s main opposition party, SYRIZA-Progressive Alliance, said on Tuesday the agreement “is strategically sound” but the country will “pay dearly” for it due the Conservative government’s delays in completing the talks that had started in 2018.

“We wonder, beyond the Navy’s needed frigates and the Air Force’s upgrade of F-16s, whether other defense choices are of such priority, and whether they exceed our economy’s expenditure capacities,” SYRIZA said.

During the press conference, Macron also said Europe needs to stop being naive when it comes to defending its interests and build its own military capacity.

France was plunged into an unprecedented diplomatic crisis with the United States, Australia and Britain earlier this month over a trilateral nuclear security deal which sank a multi-billion dollar French-designed submarine contract with Canberra.

That has caused much soul searching in Paris over its traditional alliances. Speaking for the first time on the issue, Macron on Tuesday seized the opportunity to urge for more European autonomy as Washington increasingly reorientates its interests towards China and the Indo-Pacific.

“The Europeans must stop being naive. When we are under pressure from powers, which at times harden (their stance) , we need to react and show that we have the power and capacity to defend ourselves. Not escalating things, but protecting ourselves,” Macron said.

“This isn’t an alternative to the United States alliance. It’s not a substitution, but to take responsibility of the European pillar within NATO and draw the conclusions that we are asked to take care of our own protection.”