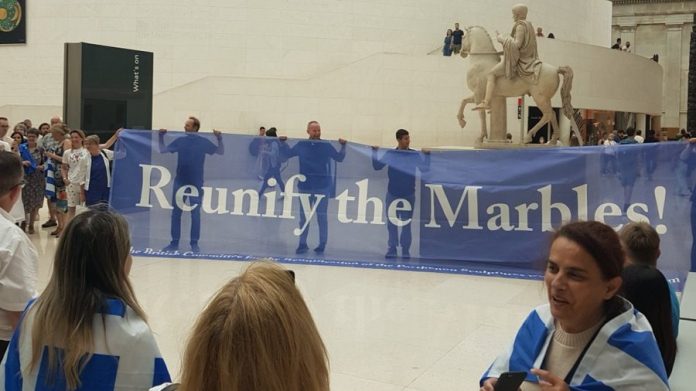 Six British MPs have expressed support for the return of the Parthenon Marbles to Greece as people in London held a protest inside the British Museum on Saturday.

The protesters unfurled banners and Greek flags, while English author and honorary Greek citizen, Victoria Hislop, held a cake with candles representing the 13 years since the inauguration of the Acropolis Museum in Athens.

The protest is the latest in a number of demands made by Greece and the international community for the return of the Marbles to Greece after they were stolen by Lord Elgin and taken to the British Museum in 1816.

According to The Guardian, six British MPs have also called for their return following Saturday’s protest.

“There could not be a better moment for the Parthenon marbles to be reunited in their Athenian home,” Labour peer, Shami Chakrabarti, told the Greek daily, Ta Nea.

READ MORE: Greece and the UK agree to hold formal talks on possible return of the Parthenon Marbles.

The Scottish National Party MP, Dave Doogan, described the continued displacement of the classical carvings as a clear case of “the acquiring hand” of British exceptionalism.

“I believe the British Museum must do the right thing and return them to their rightful home in Greece. Failure to do so is insulting to Greece and her people,” he told the paper.

The Parthenon Marbles have long been a source of friction between Greek governments and the Museum.

READ MORE: Stephen Fry presents proposal for the return of the Parthenon Marbles to Greece.

Greek Prime Minister, Kyriakos Mitsotakis, raised the issue of the sculptures during a meeting with his British counterpart, Boris Johnson, in London in November 2021.

In response, Johnson reiterated the formal position of the UK government which is that the sculptures are owned by the British Museum, which operates under a board of trustees independent from government oversight.

The Chairman of the British Museum, George Osborne, said recently that there is a “deal to be done” over sharing the Parthenon Marbles with Greece.