Yiayia Triantafilia: From a journey of migration to cooking and keeping traditions alive 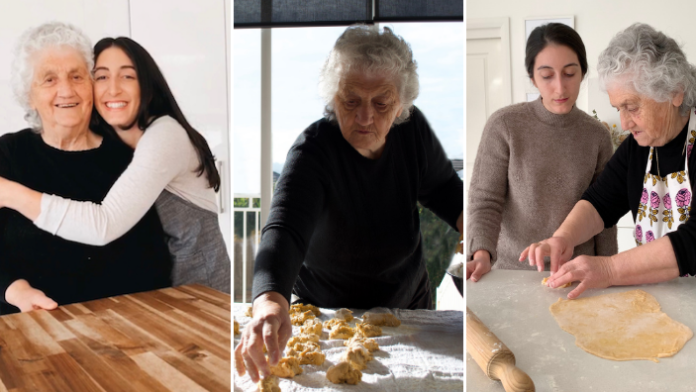 Cuisine is one of the most important differentials amongst Greek people.

Specific dishes or styles of cooking become an identity to a town, a region and even a family.

Greeks take pride in passing down yiayia’s cooking skills, from one generation to the next and in the older days this was done by inheriting yiayia’s cookbook -with her notes in it, because this is what makes a cookbook precious!

As technology progresses and peoples’ lives become busier, they move away from their kitchens. Traditions become memories and stories of past generations and culinary skills, inadvertently, become lost.

But, do they have to?

Christina Banos started writing down her Yiayia’s recipes when she was a teenager.

“I started writing down her recipes, jotting them down on pieces of scrap paper as I watched her cook and bake with my mother. It was my way of documenting and keeping our traditional cooking going, for myself, and for her seven other grandchildren,” Christina tells The Greek Herald.

Some years later, the scrap paper became photos and videos and yiayia Triantafilia’s traditional Greek recipes were enjoyed by many. This is how Homemade by Rose began.

“The name of my social platform Homemade By Rose is derived from yiayia’s full-name Triantafilia in Greek; Rose in English,” says Christina.

“When I worked as a designer in publishing, my fellow co-workers could always rely on me to arrive with a Tupperware container filled with something delicious for them to enjoy with their coffee.

“During this time, I was fortunate enough to work with some of Australia’s top stylists, photographers and food experts. It was this experience that inspired me to start Homemade by Rose”.

Cooking is about creating memories and bonds:

Triantafilia Karagiannidis, immigrated to Australia with her husband, from a village near Edessa, Northern Greece, in 1970 on the Patris.

Cooking has helped her stay connected with her home country.

Now, 50 years after her immigration journey, she has embarked on a cooking one.

One that aims to inspire the future generation to look inwards and find answers about their family history and ethnic heritage in food, as it’s often the last vestige of cultural traditions to go.

“By making meals or sweets together, we create new memories and moments that we will cherish forever. Each recipe tells a beautiful story, most of all I am immensely grateful to learn with Yiayia who makes cooking enjoyable and also a learning process.

“We both laugh, cry and learn when in the kitchen together,” Christina says and she goes on to explain how her Yiayia has helped her shape her identity as a second generation Greek Australian.

“Through her cooking, Yiayia Rose has taught me about showing love in preparing wonderful meals, desserts and baked goods. One of the things that makes me happiest is seeing my grandmother pick fresh vegetables, fruit and herbs from her garden.

“The smile on her face when she shows off her garden is priceless”.

As priceless as yiayia Triantafilia’s will to keep her culture alive through generations, so far away from her home country.

“In fact, I’m sure I inherited my passion for cooking and entertaining for family and friends from my Yiayia (and my mother)!” concludes Christina.

*All photos courtesy of @Homedrawn.