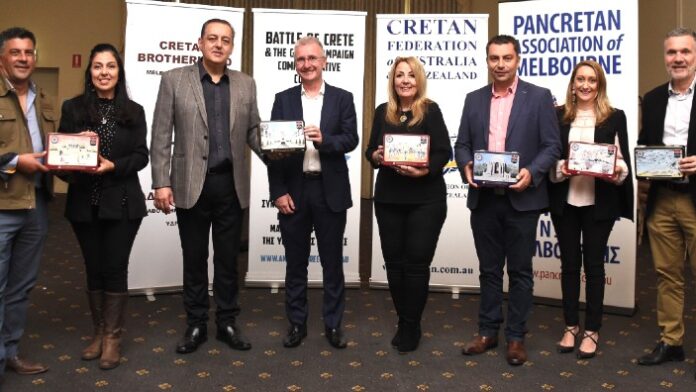 The Cretan Federation of Australia & New Zealand and the Battle of Crete & Greece Commemorative Council in conjunction with Major League Brands, are proud to announce that six iconic images all relating to the Battle of Crete will feature on the BAKERS FINEST Commemorative Anzac Biscuit Tins. These tins – which contain Anzac biscuits – are produced by Major League Brands with proceeds going to the RSL to support its work assisting veterans and their families.

All six tins have been dedicated to the 80th Anniversary for the Battle of Crete with images including: (a) Three Stuka Force planes screaming down, the seaside town of Chania, showing peaceful serenity which eventually gave way for a devastating attack, (b) The airborne invasion as the menacing spectacle that confronted the ANZAC and Allied Forces, (c) The Australian RAF Spitfire crew including Australia airmen returning from Rethymnon, (d) Melbourne’s Shrine of Remembrance, (e) Canberra’s Australian War Memorial and (f) Sydney’s ANZAC Memorial in Hyde Park.

Each edition of the tin is adorned with a historic image from Australia’s ANZAC legend. This is the second time that an image from the Greece and Crete campaigns has featured on the tins. The first was in 2017 with The image of the diggers on the Acropolis, resting beneath the famous Caryatids of the Erechtheion, symbolising the experience of Greece and its culture by the thousands of Australian soldiers and nurses during the campaign in Greece and Crete.

Mr Tsourdalakis, who is President of the Cretan Federation of Australia & New Zealand, said that it was a great honour to have Crete and its connection to Anzac chosen to feature on this year’s commemorative tins. He thanked Mr. Matt Usher from Major League Brands for accepting the proposal to dedicate this years Tins to the 80th Anniversary for the Battle of Crete.

“This recognition will bring the Anzac connection to Greece into tens of thousands of homes across Australia. This is a great initiative for all of us interested in raising awareness of the Anzacs in Crete in 1941 and more generally for the whole of the Hellenic community in Australia,” Mr Tsourdalakis said.

Both Mr Tsourdalakis and Mr Papadimitriou, urged members of the community to purchase their own Commemorative Anzac Biscuit Tins to support the RSL’s work and to have a beautiful reminder and memento of the year when Anzacs came to Greece in WW2 – before they sell-out!

Mr Tsourdalakis also stated that the Federations National program of events commemorating the 80th Anniversary for the Battle of Crete would be announced in coming days, including events in Melbourne, Sydney, Canberra, Brisbane, Hobart, Adelaide, Perth and in New Zealand.

The Tins can currently be purchased at all major Woolworths, Coles and Aldi stores across Australia.