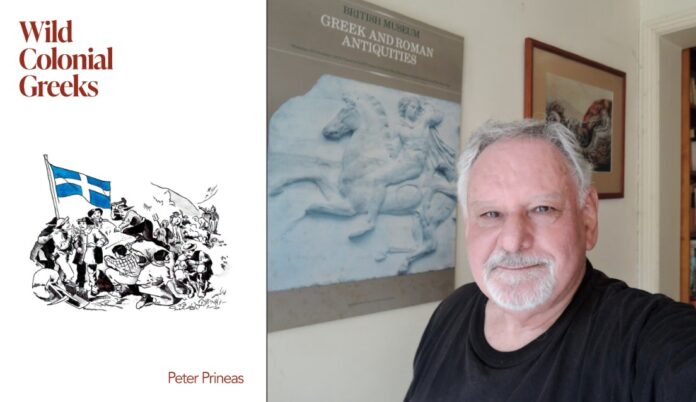 Anyone who knows me well would know that I’m an avid reader of all things romantic fiction, so when I was asked to review Peter Prineas’ new book, Wild Colonial Greeks, I have to admit I was a bit hesitant.

The book’s blurb spoke of all things history and “colonial times” and a quick flick through the pages made me aware of an over 50-page reference list – all things I typically don’t look for in a book.

But boy, was I wrong! From the minute I started reading, I was hooked.

Wild Colonial Greeks not only brought to life Greeks who arrived on Australian shores in colonial times, but it also expertly weaved in how colonial Australia viewed these Greeks at the time through frequent newspaper reports.

Two Greeks who stood out to me in particular were the goldfields doctor, Spiridion Candiottis, and Melbourne port hotelier, Andreas Lagogiannis. Spiridion drew my attention due to his clear surgical skill and fight to be recognised as a legitimate doctor in Clermont, Queensland. The tragic circumstances of the death of his daughter, Eugenie, also highlighted the extreme hardships these Greeks faced in a foreign land.

Andreas on the other hand, surprised me for totally different reasons. He was constantly fighting to defend his name and honour in the local court and although some would say he didn’t understand the culture of the place, in my opinion he came across as someone who wasn’t willing to give up no matter what hardship was thrown his way.

Now, it must be mentioned here that as someone who is in the 20-30 age bracket, these specific stories resonated with me the most because the way they were written made me feel as though I wasn’t reading a historical book, but rather a narrative of the everyday lives of everyday people.

However, that’s not the only reason why the book is so relatable. In fact, I can definitely see how others might relate to the book even just for the simple fact that it focuses on migration stories and helps people understand how Greeks contributed to multicultural Australia right from the very beginning.

And then of course there was one of the main aspects of Prineas’ book – its attempt to push back the date of Greek settlement in Australia by nearly six years.

Back in August 2020, I wrote a historical article for The Greek Herald about “the arrival of the first Greeks in 1829.” They were, according to the article, Georgios Vasilakis, Gikas Voulgaris, Georgios Laritsos, Antonis Manolis, Damianos Ninis, Nikolaos Papandreas and Konstantinos Strompolis. With this information already in my mind, I was unsure whether Prineas would be able to convince me that Greek settlement had actually occurred years before the arrival of these men, but he does.

Prineas points to a report in The Sydney Morning Herald dated June 28, 1878, which mentions the funeral at Castle Hill of a ‘George Manuel or George Emanuel’ who is said to have lived in the colony for 76 years – that would mean he arrived in Australia much earlier than the seven convicts.

Now, while I won’t spoil the rest of the supportive evidence for the readers of this article, I can guarantee you that Prineas makes some valid points for his argument that George was the first Greek to arrive in Australia. Valid enough to give his new book, Wild Colonial Greeks, a solid 9 / 10 rating. Although some chapters could’ve been shorter, with less newspaper references at times, I would still recommend this book to anyone who’s interested!