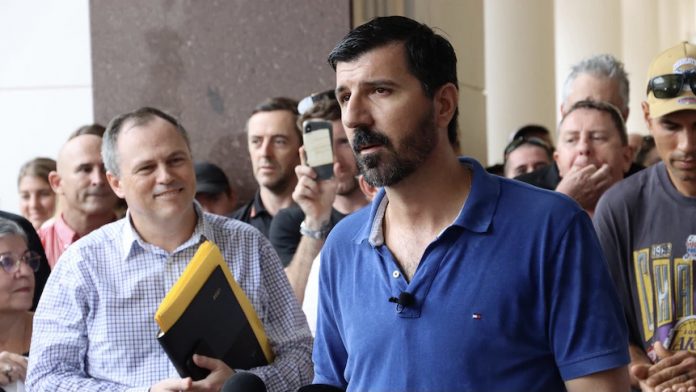 The group’s president Mario Tsirbas describes the mandate, which requires most workers to be vaccinated or face fines, as “draconian”.

“What we’ve seen is what suspending normal democratic process does to a government who’s high on a power trip and forcing draconian, unreasonable laws on everyday people,” he said.

The NT Chief Health Officer set the mandate in force around mid November to reduce the impact of COVID-19 outbreaks.

Under the Officer’s direction, any worker who comes into contact with a person who is “vulnerable” to being infected with COVID-19 is required to be vaccinated.

Children aged under 12, people who are immunocompromised, and Aboriginal people are categorised as vulnerable under the direction.

Workers who fail to get vaccinated face fines of up to $5,000.

The move has boosted vaccination rates and forced unvaccinated people to lose jobs.

Mr. Tsirbas said the group was not opposed to vaccinations, but instead objected to the mandatory nature of the policy.

“We’ve seen families at odds with each other, arguing, we’ve seen levels of mental health and stress go through the roof.”

“We’ve seen people forced to take the vaccine and see the real results of what that does to people.”

Last month, Chief Minister Michael Gunner said more than 300 public servants had lost their jobs after not receiving their first dose of the vaccine by the mid-November deadline.

The deadline for the second jab is on Christmas Day.

The NT government says 91 per cent of Territorians have received two doses of the vaccine, although the rates in some remote communities remain at very low levels.