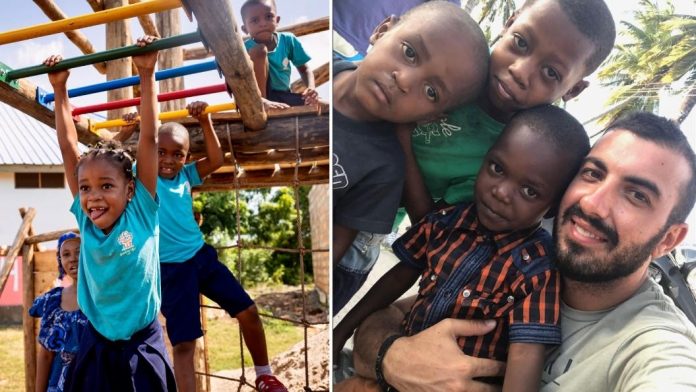 The most powerful antidote that man possesses against the fierce blows of Life Is love. The tender mood, with which he absorbs the explosive outbursts of fate.

Renos Fountoulakis, a Greek who emigrated in Dubai, turned the untried loss of his brother into “fuel” in his struggle to realize the dream of creating the “CR HOPE Foundation” with the aim of providing free education to Zanzibar children.

In the sadness caused by the loss of his brother grew hope for dozens of children, who today can access education which in the developed West is a given but in Zanzibar is a luxury.

Renos Fountoulakis talks to the “Greek Herald” about the long journey of his loss, which became an inglorious offer.

“My initial visit to Zanzibar was because of the loss of my brother,” Renos tells us.

“He was the one who proposed and organized this pleasure trip, which obviously neither of us expected could develop in this form, but certainly it was something that made us both particularly happy.

“Unfortunately, about six months after the school started construction, my brother passed away.

“But before he left, he gave me the greatest gift anyone could dream of: finding a meaning in his life! To dedicate this work to his memory is the least I could do.

“I promised him that I would make him proud as long as he sees me from above and the only way I could do it in practice was through the implementation of this project”, Renos confesses and indicates that the idea for the construction of a school was born right from the beginning.

“My desire to help the children of this island was born after a tour of mine in the local community, outside a village called Kiwengwa.

“What moved me most was the fact that, despite the extremely poor living conditions, the children of that village had a wide smile imprinted on their face!

“These young souls taught me that Joy does not imply wealth, and reminded me that I should be grateful for all the goods that life has generously offered me to this day. Considering it unfair that I, in relation to them, am favoured, I wanted to find a way to give them an “equal opportunity”.

“I identified, then, how most children in this small community did not have access to education and soon saw an opportunity where it could have a lasting impact on their future. My original idea was to fund a teacher who would provide them with free education.

“But along the way, after a fascinating sequence of events, I ended up building the “Seeds of Light” School, in collaboration with a local philanthropist named Cosiano Ismael Mbise. Even though my intentions were pure, the local inhabitants, at first, were not convinced of them.

“Being Muslims, in their eyes they saw a “white”, “Christian”, possibly part of a mission. They were afraid that I would convert their children and believed that instead of a school I would build a religious temple. I honestly don’t blame them.

“With my faith, and after a hard struggle, I have been able to prove to them that my religion is ” love” and that my God rejoices when I help my fellow men no matter what race, religion, or geographical location they may come from.”

The thrill of student progress and Melbourne

On 18 January 2020, the school opened its doors, on Renos Fundoulakis’ birthday.

“What better gift than to celebrate such an important event, after so much effort and struggle? in this way, we welcomed the first batch of students, hoping that with the care and knowledge we would of provided them, they would in turn change the world for the better in the future.

I have mixed but good emotions as I have been following the development of students over the past two years. These children now seem to be more confident and naturally have developed writing and reading skills. Also, the fact that they learn English from an early age gives them a great advantage over the other schools on the island”.

Renos, who works in marketing and hails from Crete, lives in Dubai. The conditions of life between the futuristic emirate and Zanzibar are meteoric. “Extreme. But it is precisely this combination that I would say gives me a sense of balance. Obviously, there is no comparison between Dubai and Zanzibar.

“In Dubai I am attracted to the fact that it offers opportunities, security, stability, cleanliness, innovation and multiculturalism. What repels me the most is probably that almost everything is centered around matter and hyperbole. As for Zanzibar, I like the natural beauty of the place, the simplicity of the world, the tropical climate and the relaxed rhythms of everyday life. What is particularly displeasing to me, however, is that the wealth of the island mostly ends up in the pockets of expatriates. It’s like there’s a kind of “modernized slavery.”

“Our charity CRHOPE Foundation is essentially fighting to combat this phenomenon, giving the locals the skills to claim what belongs to them: their own country!”

However, Renos is trying to offer other things to this arid region of the planet that Hope wants to grow.

“The plans are enough, and many of them already begun. For example, at the moment we are working on a project that is about empowering women in conjunction with protecting the environment.

“This is the “United for Green” project, through which the necessary supplies are given to a group of twenty-four women to produce and sell “organic charcoal”.

“Thus, they have an additional income, while protecting forest areas from deforestation. As for school, we started 2 years ago as a kindergarten.

“Today we also have a primary school and as the children grow up we will definitely expand into a secondary school. At the same time, we have used some of our classes as English and photography workshops, dedicated to some local teenagers” concludes Renos Fountoulakis, who a few years ago had visited Melbourne.

“I was 16 years old and I have to say that I saw a spotless, modern, green and “noticeably Greek” city!

“I would very much like to go back to Australia and this time visit more areas.”

To find out more about CR HOPE Foundation visit: https://www.crhopefoundation