‘The group has been a lifesaver’: Aussies in Thessaloniki celebrate 11th anniversary 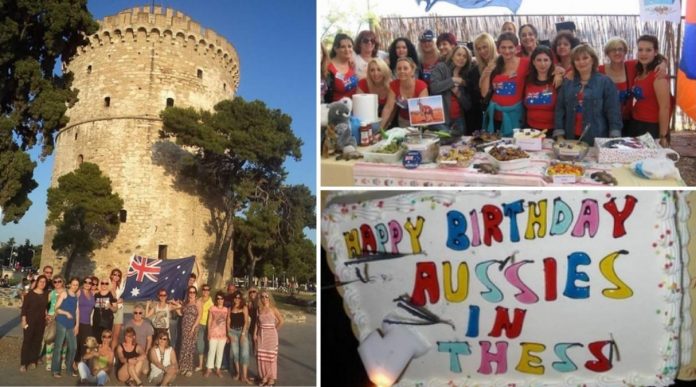 One of the most active Greek-Australian social media groups in Greece, ‘Aussies in Thess’, recently celebrated their 11th birthday.

I spoke to three members of this group to gain insight into what initially impressed me about ‘Aussies in Thess’, namely, their enthusiasm, friendliness and dedication.

As their Facebook ‘About’ page blurb states, they are ‘a group of people who rejoice in Australiana and share their common background…so as to realise this bonding and make it stronger’.

And this, they certainly do, to the point of even having a few members who are not Greek Australians – such as a Greek member who loves Aussie soapies such as Neighbours and Home and Away, and another member who is so into the Aussie band AC/DC, that this love for their music, spurred him to seek out fellow AC/DC origin countrymen.

‘Eccentric’ members of ‘Aussies in Thess’ aside, but nonetheless not your typical Greek-Australian Thessalonikian, is Steve Vardis who lives (mostly) in Australia.

Steve says he was first introduced to ‘Aussies in Thess’ when he was at his second home Lefkada, Greece, where he spends 4 months of every year. He has been an active member since the groups early days, meeting up with Anastasia and friends and posting often on their Facebook site.

I ask Steve what draws him to the club, and he says:“I joined to meet like-minded people, with our Greece and Australia connection that binds us, and I find people in Greece, like the ‘Aussies in Thess.’, more laid-back and less judgemental.”

Speaking next to Fay Tsambouri, a group administrator and member since 2012, she too stressed the important bonding aspect of the group, explaining that “it’s about people coming together, that understand.”

Acknowledging that many of the groups members have been in Greece for a long time, since childhood or adolescence, Fay explains that the ‘Aussies in Thess.’ group complements their integration into Greek society, before thoughtfully adding, “but for other Greek-Australians new to Thessaloniki or Northern Greece seeking out social contact, the group has been a lifesaver.”

Fay came to Greece after deferring her studies at Melbourne University, and completed a Degree in English Literature at the University of Thessaloniki, becoming an English teacher. She met her husband during this time and they have two sons.

As for the ‘Aussies in Thess.’ group, she felt the need to join, “to share memories about foods, sports and all sorts of topics related to Australia, which differentiate Greek Australians from local Greeks.” With a smile, she confesses, “before joining the group, I used to watch BBC on TV just to hear English being spoken.”

Discussing the groups many events, she adds, “pre-Covid, we found any excuse to celebrate!” Fay describes the range of the group’s events, from the more ‘formal’, like Australia Day or a tour to the Ministry of Macedonia and Thrace with speakers, to those such as bowling and BYO picnics.

She adds: “We also have going away parties for people returning to Australia, and birthdays, but also impromptu coffees,” subsequently noting that organising get togethers and bonding with other group members, “is easier in a smaller city like Thessaloniki, compared to Athens.”

I also spoke with the ‘Aussies in Thess’ group founder, Anastasia Skliros. Anastasia grew up in Australia, in an area which consisted predominantly of an Anglo-Celtic demographic.

She tells me her cousins were her only Greek peers growing up, as her other friends were Australians. Her father had a strong sense of Greek culture and heritage and passed this on to Anastasia. In 1991 when she went to Greece on an island hopping tour with cousins and her “Aussie best friend”.

She met her then Greek boyfriend, who is now her husband and father of their children. She founded the ‘Aussies in Thess.’ group in 2011 telling me, “I missed my Aussieness, my childhood and adolescent years growing up around Australians, but I was also inspired by the Greek Brotherhood locale organisations in Victoria.”

She goes on to enthusiastically tell me that in 2014, “our group hired a big Reception Hall in Thessaloniki and had a dinner dance and live music, with 120 of us attending – similar to those our parents used to have in Australia.”

Out of the many events that come to mind for Anastasia, she points out hiring a bus and spending the whole day at Mt Olympus which included a guided museum and archaeological tour as well as lunch at a taverna there, adding “hubbies and partners come to these events too, and we’ve even had some single members meeting their match through our club.”

Another event she joyously recalls is the Australian memorabilia bazaar whereby tables with Aussie objects are set up, such as 21 st birthday keys, teddy bears, and even school reports. “And every year we take part in Thessaloniki’s International Food Festival whereby members contribute dishes, such as pies, and lamingtons, and I did a kangaroo stew one year” she conveys, excitedly, adding, “all proceeds go to charities.

And last but not least, Anastasia highlights, “our club helps us Greek-Aussies or Aussie-Greeks – however you see yourself, through difficult times in our lives, which are sometimes hard for Greek Greeks to understand, as we have an automatic bond.”

*You can find ‘Aussies in Thess‘ through Facebook or in Thessaloniki, and you know you’ll always be welcomed.