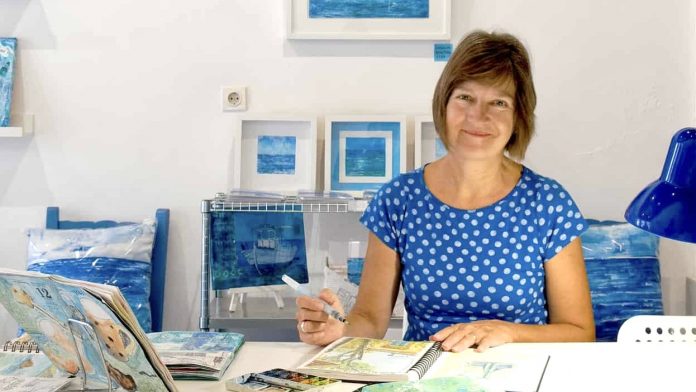 Greek diasporic communities around the world have struggled to connect with their “heart’s home” during the burgeoning COVID-19 pandemic.

Art has played a crucial role in satisfying this longing and Gill Tomlinson’s prints are no exception.

Tomlinson is an English artist living in Charakopio in the Peloponnese for the past 14 years.

She pumps out prints that capture the vibrancy and blue hues of the agricultural town from her local studio.

She’s amassed a loyal following on her social media who marvel over the art which brings them just that much closer to the sun-stoned beaches, white heat, and blue skies of Greece.

The Greek Herald chats with Tomlinson about her beginnings, inspirations, and the method behind her creations.

Can you tell me more about yourself and your background?

I was born in the north of England in 1957. I was brought up mostly in Scotland in the family business, which included tea rooms, a general store, and a filling station. From age 11, I lived in southern England in Sussex. My parents ran a sweet shop and tea rooms there. My first job was as a secretary around the age of 17.

I started working in Greece as a holiday company representative shortly before my 20th birthday in Vouliagmeni. The following year in 1978, I worked in Corfu, then Crete, Tenerife, Ibiza, and Zakynthos. All as a holiday company representative so it was seasonal work and back again to the UK in the winter. I then worked three seasons in Skyros at The Skyros Centre & Atsitsa in wholistic health and fitness places.

There was really no art in my life until I was about 36 when I started to feel the need to be creative and furiously began taking lots of adult education courses, which led to doing a foundation course in art and design in London. Then followed a degree in textile design for printed fabrics at Chelsea College of Art and Design. I graduated from the two-year accelerated degree course with a 2:1 [UK degree classification] around my 40th birthday.

After the degree, I was lucky to get a job as a print designer at a silk mill in Essex. I also did quite a bit of freelance textile design. Some of my freelance designs were sold in the [United] States to Liz Claibourne, Gap, Paul Smith, Kalvin Klein Kids, and Banana Republic.

I then worked for Cath Kidston for over five years as her print designer, in the early years of her business. I was previously her Saturday shop girl for two years in her first shop in Holland Park while I was studying.

Whilst living in the UK my husband, a graphic designer, and I took our annual holidays in Greece for several years. Santorini, Paros, Naxos, Lesbos, Kerkyra, Zakynthos – wherever we could get a reasonably priced deal during the summer.

My husband and I left London around 2004 and took a residential job in Herefordshire, looking after a retreat center. We had enough of London and my hubby was not ready to make the jump from London life to life in rural Greece, so this was a necessary interim measure! The dream of living in Greece full time was always mine. I’m very lucky my husband went along with it!

We ‘found’ Charakopio during a two-week trip around the southern Peloponnese in 2006, looking for somewhere to live. Having first checked out several possible locations via online research, we were nearing the end of our two weeks off work and hadn’t found anywhere we really liked. Then we drove south of Kalamata and a few kilometres before Charakopio we thought ‘this feels quite nice’.

We moved to Charakopio to live on the 2nd of March in 2007 and have been here year-round ever since.

Your love for Greece began as a teenager and your art journey began in your late 30s – when did you decide to combine the two and make Greek-inspired art?

I don’t remember ever deciding. The love of Greece was always there. The ability and desire to make art came later. When I began making art and developing my creative skills, I just found I most enjoyed making art with Greek colours and imagery. Whilst on a foundation course, one of my first projects was all about Greece! I remember being disappointed in my course when I was dissuaded from making my final year project about Greece. The tutor felt I had ‘done that’! Haha… I’m still not done!

Can you give the context of that trip to Greece as a teenager? Why was it so inspiring?

I really don’t know! I was about 16 and stayed in Athens for a week at the Hotel Stanley near Omonia with my parents! We did an excursion to Mycenae, Epidaurus, and Nafplion and did the three-island cruise! And of course, went to the Acropolis, Plaka, etcetera. Before that, we had holidayed in Majorca and the Canary Islands which didn’t make the same impression on me. Maybe it was just my age? Maybe it was the exoticness of Athens? I do remember loving the markets on Athinas street. Later, I had a boyfriend who had the Greek bug, so I made a couple of trips with him, and we backpacked around the islands.

Describe Charakopio for me and why it’s such an inspiration for your art.

Charakopio is a fairly large, working village on the main road between Kalamata and Koroni. It’s about 4.5 kilometres north of Koroni. Almost everyone drives through Charakopio to get to somewhere else; usually to Koroni, sometimes to Finikounda! Most people are farmers or builders or both. There are a lot of tractors on the road.

We have a large builders merchants store plus several metalworkers and a supermarket. We also still have three pandapoleons -there were more a decade ago – as well as two butchers, two bakers, three hairdressers, a barber, a florist, a garden centre, and a handful of other shops including a fresh pasta shop. Plus, my art studio! There’s a zacharoplastion/cafe, another cafe which does food, a couple of old kafenions, a grill taverna, and a taverna which *pre-pandemic* had live music on Fridays. We also have a large primary school. No bank, no post office. There is a scattering of holiday accommodation between the village and the nearest coast 1.5 kilometers away. Most summer visitors are Greeks, but we also have some foreigners who holiday in the area plus quite a few foreigners who own holiday homes in the surrounding area.

For me, it was always about moving to Greece to live. I didn’t really care too much where in Greece. I just wanted to be here.

How would you say the Charakopio locals react to your art?

The older generation is mostly bemused by the strange art shop in the village. Some people are very complimentary about the ‘pool auraia pragmatic’. Most of my customers are foreigners with summer homes here; local foreign residents and Greeks from the diaspora visiting in the summer. The locals very much identify with the paintings which are direct representations of local houses or places. I’ve often been told stories about houses which I’ve painted which I hadn’t heard of before.

How long would you generally spend on a painting? Can you describe the process?

It varies a lot! A quick watercolor sketchbook drawing done on location may take about an hour. A mixed media painting done in the studio would take several days. Some larger mixed-media paintings on canvas can take weeks. It totally depends on the size of the original and the techniques used. I do tend to work fairly small, and I like working in series.

I’ve just finished a series of thirteen new paintings for our 2022 calendar. We publish one annually. This process starts with a desire to make something with lots of texture, so I look through lots of my old photos and print a few off and rifle through my plan chest, pulling out bits of papers, sketches, and half-finished paintings I’ve previously made. All this was used both as a reference and a starting point for the 13 new paintings. In this series, I applied paint or gesso thickly to the blank paper and drew into it to start with. I then over-painted layers of acrylics and also used wax to form a resist. I also used ink and a dip pen and paint markers later in the process. Some of the paintings had quite a lot of collaged elements and some had none. The collage came from my stash of hand-decorated papers.

How does art help the Greek diaspora connect to their “heart’s home”?

My art seems to connect on an emotional level with people who love Greece as I do. I’ve had similar reactions from people from all over Europe, as well as Greek Americans, Greek Canadians, and Greek Australians. A painting of an old Greek village house, for example, might evoke memories for them even if their memories are connected to a different part of Greece than the subject in the painting.

There’s a certain nostalgia in my work that harks back to the old Greece; probably the Greece I first knew in the late 1970s. I’m drawn towards painting crumbly old buildings, traditional pots, churches, village scenes, seascapes, taverna chairs, stepped streets, caiques, electric meters, and geraniums in oil tins. I suppose you could say it’s a romanticised view of the place. It certainly is Greece as seen through the eye of a foreigner. So perhaps that’s also what people connect with, but I think the main thing is they recognise the love and longing for the place. I spent much of my life, while living in England, longing for Greece. Now, here I am!