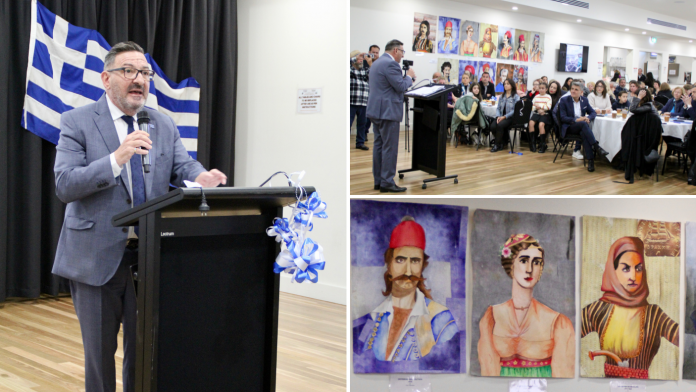 With Greek delicacies, traditional dances performed by young students and heartfelt speeches Adelaide’s community commemorated on Saturday, 12 June the 200th Anniversary from the beginning of the Greek War of Independence in an event hosted by Federal Member for Adelaide, Steve Georganas MP at St Anthony’s Community Centre in Prospect.

In his speech, delivered in Greek, Steve Georganas welcomed the attendees and explained that as an Australian politician of Greek heritage he felt it was his duty to his constituents to organise an event for this historical milestone.

“This is not a political gathering. We are here today to commemorate those who lost their lives fighting for freedom and celebrate our common roots and heritage,” said Georganas.

“We should also acknowledge all those first Greek migrants to Australia who made their own little, personal revolutions. They established a new life far away from home and fought to keep the Hellenic language, faith and culture alive for their children and grandchildren.”

“Australia is our home and I am proud to be representing a population of 14.000 Greeks in my electorate. The Hellenic spirit needs to live on through the new generations,” he said.

In attendance were Tom Koutsantonis MP, Shadow Minister for Infrastructure & Transport; Andrea Michaels MP, Member for Enfield; Tony Zappia MP, Member for Makin and Prof. Andreas Evdokiou, President of the Cyprus Community of SA as well as other state politicians and representatives of community organisations.

In his address, Tom Koutsantonis MP gave a brief account of the facts that led to the Greek War of Independence and spoke about the passion of Hellenes for freedom which inspired an entire generation of intellectuals, poets and philosophers.

“Lord Byron wrote a poem which became a best seller in the UK and this is where he found the money to fund the resistance,” said Koutsantonis before he went on to read Byron’s poem, The Isles of Greece.

Koutsantonis also spoke about the Greek Genocide in history and the role of religion in the preservation of the Hellenic culture.

“What we are celebrating today, an Empire tried to snuff out for ever,” he said and promised that together with his parliamentary colleagues they will keep fighting to have May 19th recognised as the official Remembrance Day for the Greek Genocide.

Andrea Michaels MP, expressed her gratitude that in a difficult year Adelaide’s community is able to celebrate the Hellenic culture and thanked St Anthony’s Parish priest, Fr Nicholas and the volunteers for their efforts.

The event concluded with Greek dances from students of St George College and the Messinian Association of SA and a moving video presentation put together by Unley High School Students.