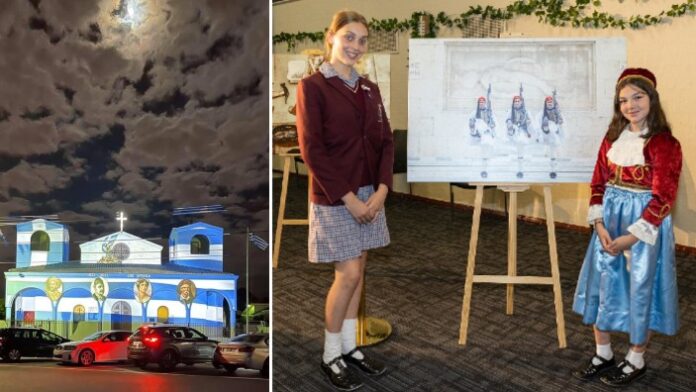 The Greek community in the Melbourne suburb of Oakleigh have been treated to a number of special events to mark the bicentenary of the Greek Revolution this year.

Here’s our list of what went down over the last week:

Light display as a tribute to Orthodoxy and Hellenism:

The Greek Orthodox Community of Oakleigh & District, the Parish of Saints Anargiri, Oakleigh Grammar and Saints Anargiri Language Centre paid tribute to the Greek Revolution on the 200th Anniversary of its proclamation and the Annunciation, by illuminating the Church with respect and honour.

In line with many wonderful Hellenic tributes worldwide, the concept to this initiative was planted by Mark Robertson, Principal of Oakleigh Grammar, at the Shrine’s footsteps during the Independence Day wreath laying commemoration.

Members of the Board worked frantically over a 72-hour period to depict the story, paying respect and honouring Orthodoxy and Hellenism. Our Community warmly welcomed the Hellenic and Orthodox faithful of Melbourne and provided them with the opportunity to drive by and observe with pride and respect our blue and white flag and heroes from the revolution.

The lighting effect commenced with Father George Adamakis and chanters, chanting the Akathyst Hymn and the National Anthems, leaving the massive crowd, comprising both young and old, mesmerised with unseen memories.

The Board wish to relay their deepest respect and gratitude to Melbourne’s Hellenic population for their attendance and support of this event of unison, and in particular His Grace Bishop Ezekiel of Dervis, the Greek Consulate of Melbourne, Emmanuel Kakavelakis, the President of the Melbourne Central Greek Community, Bill Papastergiadis and Tony Tsourdalakis, the Chair of the 200 Celebratory Committee.

‘The Evzones Collection by Nick Bourdaniotis’ launches at Oakleigh Grammar:

The light display also marked the commencement of The Evzones Collection, a photographic exhibition hosted by Oakleigh Grammar, in conjunction with the 2021 Victorian Bicentenary Committee and the Organisational Council for Greek National Day.

READ MORE: Photographer, Nick Bourdaniotis, on ‘getting the shot’ and being part of the Evzones family.

Guests were greeted on arrival to the event by senior college students from Oakleigh Grammar. Two Year 7 students, Dimitra Ballis and Elena Logan, from the school also gave a rousing performance of the Greek and Australian National Anthems.

This was followed by speeches from Bishop Ezekiel, who spoke of “the power of the image of the evzone,” and the Consul General of Greece in Melbourne, Emmanuel Kakavelakis, who gave a history of the uniform of the Evzones.

Mr Bourdaniotis himself kindly donated one of his exhibition prints to be silently auctioned throughout the exhibition, with all money raised to be donated to Agapi Care Inc.

Chief Executive Officer at AGAPI Care Inc., Mrs Mary Gakopoulos, as well as members of the board, were in attendance on the opening night and thanked Mr Bourdaniotis, Chris Damatopoulos and Mark Robertson for choosed Agapi Care Inc for the silent auction.

The exhibition will remain open at Oakleigh Grammar Convention Center until Sunday, April 4.