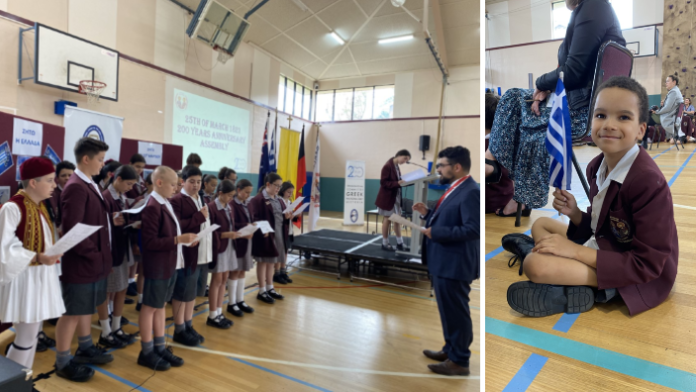 Young students from Oakleigh Grammar in Melbourne celebrated the bicentenary of the Greek Revolution with flags, poems, songs and dance at a special school assembly on Friday, March 26.

The celebration is organised annually by the Language Department of the school and the responsible teachers, and this year the assembly was opened by a group of drummers who accompanied the official guests to the indoor gym.

The primary and high school students sang with pride the National Anthems of Greece and Australia and then the Byzantine choir of the school, under the guidance of Professor Costas Damatopoulos, sang festive hymns.

The program was rich with songs, poems and traditional dances, while the show was stolen by the pre-school students who sang loudly the song “My bright moon” impressing the guests.

The event was honored by the presence of His Grace Bishop Ezekiel of Dervis, the Archiepiscopal Vicar of Melbourne, who spoke to the young students with great emotion about the double celebration of March 25, as well as the Chairman of Victoria’s Greek National Day Council, Tony Tsourdalakis.

The Governing Committee of the school was represented by the President, Mr Christos Damatopoulos, the Secretary, Mrs Xanthi Delli and the Treasurer, Mr Sotiris Varsos. Finally, the Principal of the School, Mr Mark Robertson, spoke with a Philhellenic character about the celebration of the Greek National Anniversary.

The students, with smiles and pride on their faces, presented a wonderful program leaving the guests with the best impressions.

‘If we understand each other, we’ll learn more about ourselves,’ says Peter Mousaferiadis

Maria was once staunchly vaccine hesitant: Here is what changed her mind