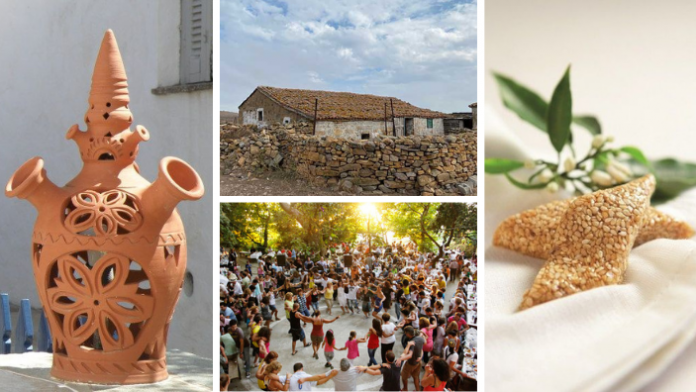 Six traditional customs from the Greek islands have been officially registered on Greece’s National Index of Intangible Cultural Heritage.

According to Greece Is, the Greek Ministry of Culture and Sports added these customs to the index as a means of preserving them for future generations and “actively contributing to their promotion and enrichment.”

The decision relates to specific practices and social rituals from the islands of Andros, Rhodes, Sifnos, Ikaria, Limnos and Nisyros. They include:

‘Veggera,’ or social gatherings, take place on the Greek island of Andros and are seen as crucial for maintaining social and familial networks.

They typically start off as informal family gatherings, usually in the evening and last until the early hours of the morning. Handmade treats are offered during the gathering, followed by drinking and dancing.

Melekouni is a traditional sweet produced in the village of Koskinou on Rhodes. Made with sesame seeds, honey, almonds, citrus zest and spices, melekouni has a soft, chewy texture and is golden yellow in colour.

Due to its high nutritional value, melekouni is regarded as one of the healthiest Greek snacks, but it also stands out due to its great flavour.

Melekouni is traditionally offered at weddings, baptisms and name days in the village, and has been registered as having a protected designation of origin (PDO) by the European Union.

3. The ceramics of Sifnos:

Sifnos is a still and tranquil island with a mythic reputation as a haven for potters and ceramicists. The ceramics industry forms a key part of the cultural heritage and collective sense of identity of islanders.

The rich lineage of pottery on Sifnos can be attributed to the clay-based earth and the copious sun which blesses the island throughout the year.

4. The Festivals of Ikaria:

The island of Ikaria hosts more than 80 festivals throughout the year, celebrating various Christian holidays.

The festivals, open to locals and visitors alike, include traditional music and dance, and serve to renew and maintain social and familial ties across the island.

Through the festivals, traditional Ikarian songs, dances, stories, and recipes are passed down from generation to generation.

The “mantres” or “yards” form the cornerstone of the agricultural infrastructure of Limnos. They are places of production where people can gather, share resources, discuss and inform each other on farming practices, and manage the local economy.

A mantra typically consists of a main building, several auxiliary spaces for storage, and the surrounding agricultural land.

The island of Nisyros is home to the generations-old custom of the Kalandira, celebrated each year on Lazarus Sunday.

On the day, islanders sing traditional songs and taste the “lazarakia” (stuffed pastries baked in the shape of Saint Lazarus).

During the celebration, school children, carrying specially-made bouquets of flowers and palm fronds (known as “vagia”), parade through the villages singing a poem about the Resurrection of Lazarus.

The children then walk around the Kalandira, a wooden object composed of two flexed, arc-shaped pieces forming a cross, and decorated with flowers.