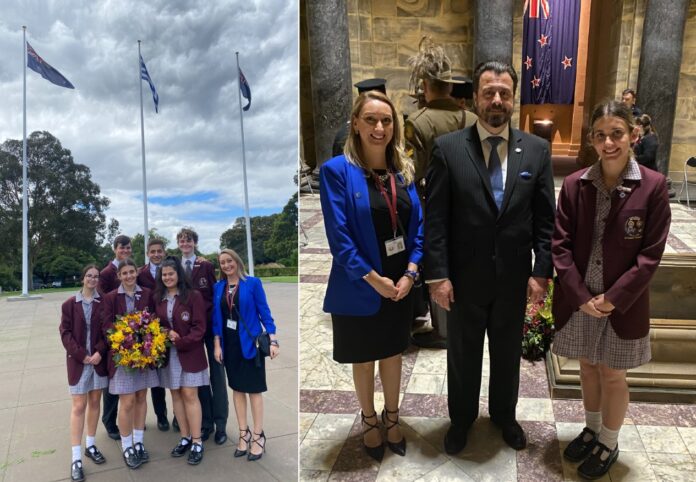 The students of Oakleigh Grammar School proudly participated in different events for the 200th anniversary of the beginning of the Greek Revolution throughout the week.

On Sunday, March 21, a group of students, including the Senior School Captains, Vice Captains and Middle School Captains attended the official Doxology service which took place at the Church of St. Eustathios in South Melbourne. After the Doxology, the students went to the Shrine of Remembrance in Melbourne, where they paid tribute to the struggling heroes of the Greek Revolution, who 200 years ago they sacrificed their lives for a free Greece. Principal of the school, Mr. Mark Robertson, and the Chairman of the Board, Mr. Chris Damatopoulos, accompanied the students to this special event. Despite the rainy weather, the students celebrated the Greek Independence Day by raising the flags of their two homelands and proudly singing the National Anthems of Australia and Greece.

On Tuesday 23 March 2021, the Society of Kalamata “23 March” organised the commemoration and celebration of the 200th anniversary of the liberation of the city of Kalamata to honour the heroic Greek women and men who fought and eventually liberated Greece, and to celebrate the events that led to the first Hellenic republic. Oakleigh Grammar was represented by the Acting Head of LOTE, Mrs Natasha Spanos.

Senior School Captains and Vice Captains attended the Flag Raising Ceremony at the Federation Square. The event was organised by the Association of Greek Language & Culture Schools in Victoria in conjunction with Thessaloniki Association “The White Tower” and Panmacedonian Association of Melbourne & Victoria. The student Angelica Athanasakis addressed a greeting on behalf of Oakleigh Grammar school. She mentioned that as a third-generation Greek-Australian, she is proud of her identity. She also said that she feels very emotional because 200 years later she has the opportunity to honour all the heroes who fought for Greece. At the end of the event, students sang the Greek and Australian National Anthems.

A second group of students attended the Divine Liturgy and the Doxology that took place in the Greek Orthodox Church of St Anargiri in Oakleigh. The students proudly held the flags high, paying tribute to the heroes of 1821. The school choir also participated in the Liturgy.

Finally, students attended at the official Doxology at the Church of St Eustathios and a ceremony at the Australian-Hellenic Memorial. Following the ceremony, students participated in the wreath-laying ceremony at the Shrine of Remembrance. Toni Stathopoulos laid a wreath on behalf of the Oakleigh Grammar School.

On Sunday, 28th of March, the Australian Greek Exservicemen’s Association INC hosted its official commemorative service for the 200th anniversary of Greek Independence at the Holy Monastery Axion Estin in Northcote. Students attended the Doxology and the wreath-laying ceremony at the Greek Memorial. The School Captain Angelica Athanasakis laid a wreath of behalf of Oakleigh Grammar.

Congratulations to all students who participated to all these significant events and celebrated proudly the 200th anniversary of the beginning of the Greek Revolution.