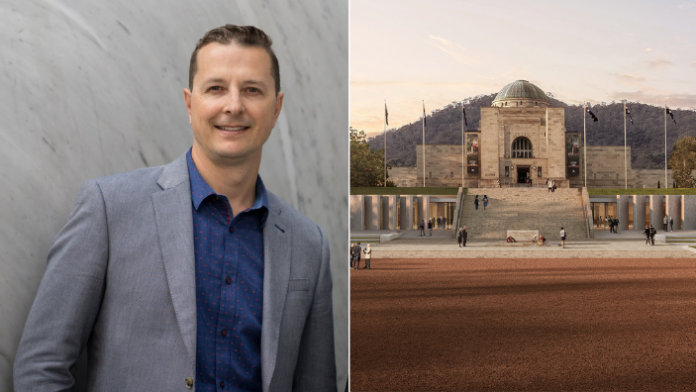 Not in the flesh, but through his designs.

Bandoundas says it was a twist of fate that led him to work on Australia’s most culturally significant museum; the ‘typical wog’ growing up in Sydney’s southwest never saw it coming.

He’s now the awarded director of Scott Carver – a firm that recently won a bid to reinvigorate a precinct in Parramatta, which includes a new through-link between the city’s three busiest streets.

The Greek Herald chats with Bandounas in review of his accomplished career.

Tell us more about your Greek heritage.

I was born in Redfern to Greek parents. My parents came here in the late sixties. My mother is from a small village called Panopoulou in Ilia in the Peloponnese, and my father is from an even smaller village called Spartoulia in Ilia in the Peloponnese. The two villages are within kilometres of each other, but ironically, my parents met for the first time some 14,000km away in Sydney, it was obviously meant to be.

Like a lot of immigrant Greeks of that era, they moved into a share house in Redfern, where they made friends with other immigrant Greeks and made them family by christening each other’s children. My parents had two children of their own, my older sister and myself, and at that point, we all moved to Bankstown so my father could be closer to his work.

When did you realise you had the creative chops for architectural design? What inspired you to study engineering and architecture?

Growing up in the ’80s in Bankstown as a typical wog, and influenced by older cousins, I absolutely loved muscle cars, still do, so as early as I can remember I loved sketching cars, mutating various models and creating my own typologies. I also loved street art/graffiti, and the whole process around creation, it was a real euphoric experience, and still is today.

I think my creative side comes from my father, before moving to Sydney, Dad spent a few years in Athens where he worked as an apprentice blowing and hand carving glass crystal ware. There wasn’t much of an industry here in Sydney for that type of creative skill, but to all our relatives here, dad was the innovative fixer, the “MacGyver” of the family.

Growing up in a tough neighbourhood I got into a bit of trouble here and there, and by high school, things weren’t looking that positive. However, in a sliding doors moment in year 10, I was given a nudge in the right direction by a substitute careers teacher. He came to our school for 1 day, and it happened to be the day I was booked in for my work experience conversation. He listened to me speak about my passion for sketching and suggested I try architecture. A few months later I spent a week working in the Government Architects office in the CBD and I was bitten by the design bug.

This gave me a goal to strive for and combined with my parents support and strong work ethic, it gave me focus and a purpose that I still use as motivation to this day.

What is central to architectural design? Why is it important to cater to diverse communities?

At a basic level, architecture is an innovative spatial solution to a given problem; however, good architecture should also have a profound impact on our lives. It should not only shape our space physically and socially but should also touch us personally. In an age of disposable consumerism and the social media movement, architecture has the potential to create equilibrium and be the ‘constant’, but to do this, we must design environments that have a purpose.

Ultimately, for me, architecture is the pursuit of this purpose, something I believe is inherent in the Greek DNA. In the Golden Age of Hellenism, our ancestors evolved architecture from the early Egyptian philosophies of Imhotep to one that celebrated the human spirit. Methodologies around process, precision, scale, and proportion provided the physical connection, whilst conceptualism and aesthetics provided the philosophical connection. Together, they worked to encourage the Hellenistic pursuit of a higher purpose, something we still reference today.

What has been your all-time favourite project to work on?

There are several, but one that stands out as a turning point early in my career is the Macquarie Bank Building on Kings Street Wharf. It was a competition we won, which I was involved with from inception to completion. The key conceptual driver being an innovative exoskeletal structural diagrid [sic] that supported the entire building from the perimeter, allowing for an unnumbered floor plate.

What are you most proud of in your career?

Hands down, it is winning the national design competition for the New Southern Entrance to the Australian War Memorial in Canberra in 2019.

The Australian War Memorial is an enduring, culturally significant symbol of remembrance that commemorates those that gave their lives for our nation. It is a physical representation of pride, honour, courage, and sacrifice. It was important that the design approach was sensitive to this, and also evolved the original vision.

The connection to the existing War Memorial was established through the creation of a new focal nexus, the Oculus, located at the heart of the new Southern Entrance. The Oculus not only visually and physically connects to the existing Memorial but also allows for the provision of experiential and emotionally inspired moments in the spatial planning.

We were up against the best firms in Australia, so we carried the underdog tag, I had also just become Design Director in the business, so I had my own personal pressure to win. It was a real honour in the end, and my humble upbringing gave me perspective and internal fulfilment.

I’m really looking forward to the day when its built, and I can walk my three girls under the oculus and gauge their reaction. I’m hopeful that it will inspire them and others to empathise and reflect on what it means to be better humans.