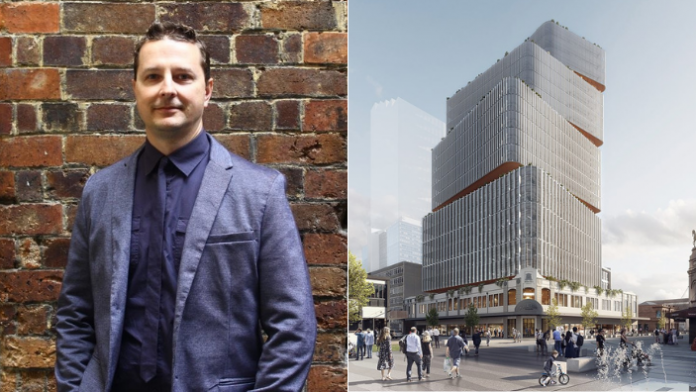 “The opportunity to participate in such a transformational project is a humbling experience, which can only be topped by the win itself,” director Nicholas Bandounas says.

The studio has developed four key design principles to celebrate the Burramattagal people in the heart of the city.

A through-link between the city’s three busiest streets called the ‘Ngara Nura Way’ – between Marsden, Macquarie, and Church Streets – is just one of the efforts to incorporate the Dharug culture.

Awabakal man and creator Matthew Fellingham is consulting the studio on ways to incorporate First Nations principles in the building’s design.

“Working with the team at Scott Carver allowed me to interject cultural knowledge passed down from my Ancestors,” he says.

“As an integrated design team, we workshopped the Connecting Country Framework to develop the design principle of, ‘listening to an Aboriginal voice first’, for place names, wayfinding and meeting places.”

Bandounas says these principles “are equal parts physical and philosophical, driven by geomorphology, contextual history, community, and the urban framework”.

Parramatta is in the geographic heart of Sydney and shapes up as a ‘second city’ as it undergoes constant citywide development.

Share
Facebook
Email
Twitter
Pinterest
Linkedin
WhatsApp
Viber
Print
Previous articleAdelaide Olympic through to FFA Cup Round of 16 for their second time ever
Next article‘We will have COVID-19 outbreaks across Australia’: Deputy CMO, Professor Michael Kidd