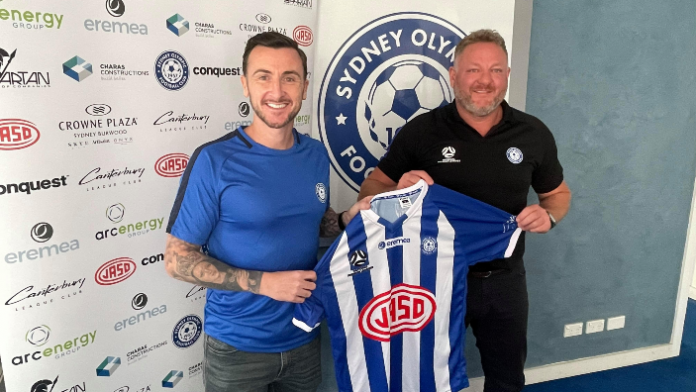 Sydney Olympic Football Club is excited to announce the signing of former Newcastle Jets striker, Roy O’Donovan, for the upcoming FFA Cup Round of 32 match and the 2022 NSW NPL season.

Roy has made over 125 A-League appearances with the Newcastle Jets, Brisbane Roar and Central Coast Mariners. Prior to this, Roy has been capped by Ireland at Under-19, Under-21 and B level.

Sydney Olympic Football Club Director, Damon Hanlin, said he was looking forward to the contribution Roy would make across the Club.

“On first meeting Roy it was evident he was professional and committed to positively contributing to our Club both on and off the pitch. In addition to the experience he will bring to the playing group, Roy will work across the Club to support and mentor talented and attacking players within our Men’s and Women’s pathway,” Mr Hanlin said.

Head Coach, Ante Juric, was confident Roy would make an immediate impact on the playing group.

“Roy is a great addition to our squad, he brings experience and he is a proven goal scorer at the highest of levels. Roy is another important piece to our team as we look to succeed as a team and club this season and beyond. We are looking forward to him joining the team in training,” Mr Juric said.

“I am as willing as ever to play and support this great Club in both the upcoming FFA Cup match against Sydney FC and the 2022 NPL season,” O’Donovan said.

“There are few Clubs like Sydney Olympic in Australia, a great tradition and history, supported by passionate fans that want success for this Club. I will be trying my best to contribute to the team and help bring success to this Club to make the fans proud, I like the look of our squad, many young aspiring players combined with some experienced players, I can’t wait to join them on the park.”

Roy will commence training from next week ahead of the upcoming FFA Cup Round of 32 match against A-League heavyweights Sydney FC at Belmore Sports Ground on Wednesday 24 November.

Stay tuned next week for event details, including how to buy your tickets to what will be a great night in the history of our Club. We are looking forward to welcoming our supporters and football fans in general back to Belmore for a great night of football!