Jim Moustakas explains why books and wine are lockdown must-haves 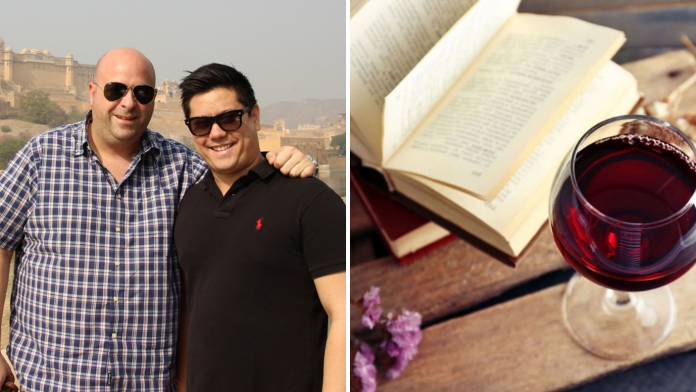 The Good Wine Club was suggested as a casual idea during a conversation between cofounders Jim Moustakas and Christopher Carter one day in lockdown.

Months later, Mr. Moustakas says he has lockdown to thank for its inception.

“[My partner Chris and I] were talking one night during the lockdown, and we thought, ‘What a good idea to get books and wine onto a platform and offer it to people’,” he tells the Greek Herald.

The Good Wine Club is an independent national wine club launched earlier this year in Sydney.

It randomizes book and wine suggestions for customers 18 years or older while supporting Australian-made wine.

Mr. Moustakas says wine drinking has been ingrained in his Greek heritage and culture since he was a child.

He was born in the central German city of Frankfurt and made the move to Athens with his father after separating from his mother.

“Being of Greek heritage, being born in Germany, and migrating to Australia as a child, food, and wine was and always will be ingrained in my culture,” Moustakas is quoted in a press release.

“We were there for about that three years,” he tells the Greek Herald.

“[My dad] needed help looking after me and so we ended up moving here so that he can get help from my grandparents.”

He ended up moving to Sydney’s inner-city where he’s run his own media content marketing company VisionAir since 2012, but says his “exposure with wine” peaked eight years ago when he co-founded a restaurant in Newtown.

“Me and two other guys [owned Urban Bites] on the northern end of Newtown, towards the Sydney University campus,” he says.

Urban Bites caved into COVID-19 lockdown restrictions in June after 15 years but Moustakas says they “got rid of it about eight years ago now”.

He and his partner Chris combined their experience in the wine industry and their travels across Europe to bring the Good Wine Club.

Moustakas agrees it’s more “mentally stimulating” than “being glued to a TV screen all night.”

“It’s almost like a nostalgic feeling when you read a book,” Carter tells the Greek Herald.

“Sometimes we do get an overload and a saturation of digital content and it gets a bit too much for us, especially at this time.”

“We were thinking that it would be a beautiful thing to just get people to just turn off, zone out for two hours with a beautiful glass of Australian wine and a nice book.”

“We wanted to give people that ritualistic thing that happens every Tuesday afternoon or every Thursday night where they just turn off their phones for two hours and tune into a nice book.”

It’s the perfect timing for the millions of Australians currently working from home in lockdown.

“Especially at this time too, we have got people you know at home basically just working off the computer and you know coming in and out of zoom calls,” he adds.