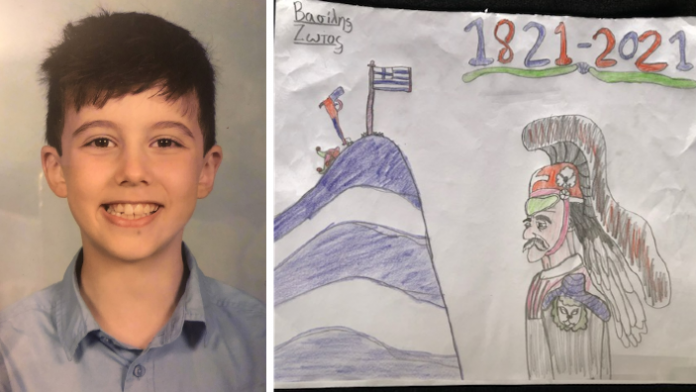 Vasilis Zotos, a 5th grade student from the Greek Community of Melbourne’s (GCM) city school, was distinguished in the competition and will be awarded at the Special Award Ceremony (via internet), which will take place on Saturday, November 27, 2021 from 8pm to 10pm at the Athens Concert Hall.

The Director of the School of Language and Culture of the GCM, Ms Maria Bakalidou, said that “it is touching that a student, who is so far from Greece, has been inspired by the Greek Revolution to paint one of its most important heroes.”

“A big thank you to his teacher, Mrs Katerina Grammenou, who encouraged the children to take part in the competition and a big congratulations to Vasilis for his effort.”

The Community Schools support and encourage initiatives of their students that promote Greek learning and the development of the cultural, historical and social identity of their two homelands, Greece and Australia, in order to create thoughtful and active citizens of the world.