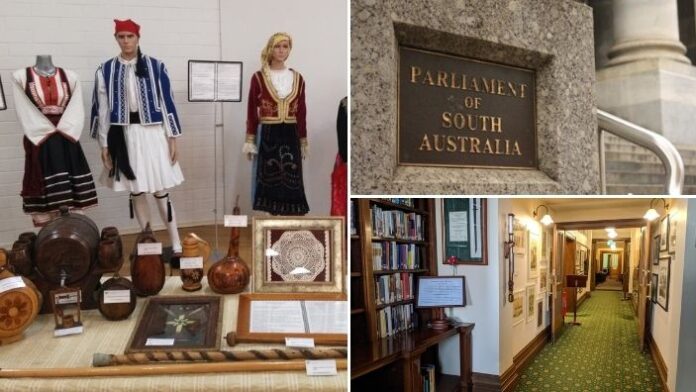 On the occasion of the 200th anniversary of the Greek War of Independence the Greek Museum of Adelaide is launching two exhibitions.

The first exhibition, is set to be held at the South Australian Parliamentary Library from March 22 to April 15, 2021 and the second in July at the West Torrens Auditorium.

“To Greek people, the Parliament is a state institution which functions as a temple of learning and culture. This is what the Greek Museum of Adelaide is aiming to do as well. To maintain, promote and preserve the culture and encourage younger generations of Greeks and non-Greeks alike and to help them engage with this part of Australia’s cultural heritage,” Greek Museum of Adelaide President, Chrysoula Melissinakis, told The Greek Herald.

The exhibits consist of family heirlooms from first- and second-generation Greek migrants in Australia kindly donated to the museum as well as pieces of art from artists in Greece.

“One of our goals is to pass-on the love for our roots and culture to future generations and this is the reason we encourage schools to visit the exhibitions,” said Mrs Melissinaki noting the problems faced by the Museum.

“The fact is that as non-for-profit organisation the Museum has no state or other funding and we only rely on the support of members and donors. Although our financial resources are limited and the lack of a dedicated building is a very important issue that is yet to be solved, we will continue to support this important cultural project we initiated,” said the Museum’s President.

READ MORE: Why Helen Kari donated her artwork and family heirlooms to the Greek Museum of Adelaide