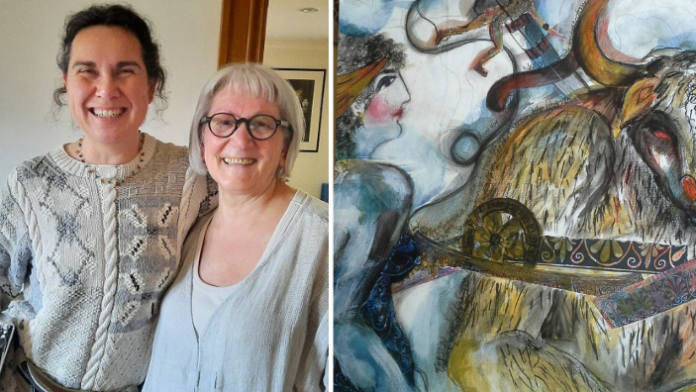 Over the course of the last year, Helen Kari, a first-generation Greek Australian, donated her late mother’s ‘kentimata’ (crochets) and some of her own Minoan Crete themed artwork to the Greek Museum of Adelaide.

Helen’s family, originally from Pyrgos Ilias, immigrated to Australia with her parents in 1954, when she was 5 years old, on board Castel Verde.

“I remember the day we were leaving our village and the parental home where I was born. My father went to lock the door with a key and as he put it in the door the key snapped. He then turned around to my mother and told her in Greek ‘den prokeitai na gyrisoume pisw’ (we are never going to come back)” Mrs Kari, 71, tells The Greek Herald and goes on to describe the journey to Australia.

“My mum was constantly seasick. We arrived with no relatives here. We came on our own. We were taken to a disused army camp, outside Melbourne, in Bonegilla. Three days later, my father was separated from us and he was sent on a train to Adelaide. We thought he’d go to a farm, work for the day and come back to the camp. But it wasn’t to be the case.

“After four months we were reunited with my father. It was very hard time not only for my parents but for many migrants in the 50s.”

READ MORE: From Kastoria to the Greek Museum of Adelaide: The story of a black velvet coat

Immigrants’ donations to be showcased in upcoming Exhibition

More than sixty years later, Ms Kari’s family heirloom and art pieces along with other exhibits from Greek and Cypriot artists, will be on display in the upcoming Celebration of Handcrafting Exhibition that will be hosted from Saturday 19 December 2020 to Saturday 2 January 2021 from 9.30 am to 5 pm each day (closed Christmas Day and New Year’s Day) at Flambouro Hall, in Glenelg.

Asking her why she decided to donate these pieces to the Museum, Ms Kari replies that she enjoys the idea of Greeks creating a legacy in Australia for the next generation.

“I was downsizing my house and we had to get rid of a lot of stuff. Amongst those, were crochets my mother had made as a girl and she had given all her children a piece each.

“Although they were precious to me, I had them for 45 years in a cupboard and have never used them in my house. My children aren’t going to use them either. So, I heard about the Museum and became interested in the idea of Greeks building a legacy in Australia for future generations,” Ms Kari says.

The Exhibition focuses on three distinct aspects of Greek heritage and its core is the original works of the late Gregory Poufera. These works include paintings and three-dimensional pieces made of matchsticks.

A not-for-profit association, established in May 2019 the Adelaide Greek Museum’s purpose is the promotion and preservation of the Greek culture in Australia. Most of the exhibits come from donations and the founders hope to create a permanent home for their ever-growing collection.

*Entry to The Celebration of Handcrafting Exhibition is free but gold coin donations are appreciated. Along with the Exhibition, the Museum is also hosting a series of Lectures and Movie Nights. Admission fee for movies is $10 per person, free for under 19. For more information visit the Museum’s FB Page or call 0457 456 339