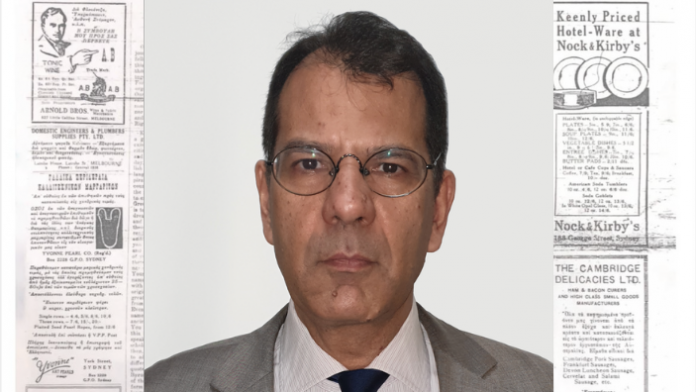 The Ambassador of Greece to Australia, George Papacostas, has sent a letter of congratulations to The Greek Herald to mark its 95th anniversary this year.

In his letter, Ambassador Papacostas shares how he has become an “avid reader” of The Greek Herald since he first arrived in Australia last year.

Here is the full message in English:

I am honoured to be able to communicate in writing with the historic newspaper “Ellinikos Kyrikas,” on the occasion of the 95th anniversary since its first issue in Australia.

Since I was appointed Head of Mission of the Embassy of Greece in Canberra last year, I also came to be an avid reader of the newspaper. Through its articles and the comments of its editors, I am being informed about political, financial, social and cultural events in Australia, Greece and various other countries around the globe.

I am also updated on the numerous initiatives and proceedings of the Greek Diaspora of Australia who keeps a warm interest for the motherland, its development, progress and prosperity and transmits its customs and culture to the younger generations.

Please accept my sincere congratulations for your publishing and reporting efforts and my warmest wishes for the newspaper’s longevity and further development.

Here is the full message in Greek: