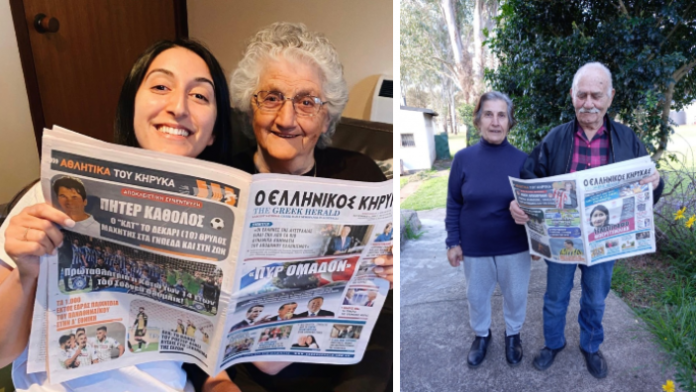 For 95 years, The Greek Herald has been providing comprehensive coverage of local, overseas and community news and information to Greek Australians nationwide.

This coverage has become a part of the everyday lives of Greek migrants as many grab the newspaper every morning from their local newsagent to connect back to their homeland and read stories of other Greek Australians like them.

With our digital transformation as well, we continue to play a significant role in shaping the future of Hellenism in Australia by promoting Greek values, language and culture online.

In saying this, The Greek Herald spoke to some Greek people who have been reading the print newspaper for over fifty decades and others who came to Australia at a young age and enjoy reading our stories online. This is what they had to say about what The Greek Herald means to them:

Nick Andriopoulos, 74, has been reading The Greek Herald ever since he first arrived in Australia from Greece in 1965.

“I was 18 years old and came by myself. I used to read The Greek Herald on Park Street [in Sydney] at the takeaway shop where I worked for five years,” Nick says.

“I’ve been reading the paper for 56 years exactly, every Wednesday. I didn’t know how to read in English so I would read the Greek newspaper which gave me news on sports that I followed, and it gave me news from my homeland and Australia as well.”

Nick says his favourite thing about The Greek Herald has always been the sport section and the fact that it helps him stay connected to Greece, even now during the pandemic.

“I’ve been getting home delivery of the paper now. My daughter organised it every Wednesday and Friday. It’s great.”

Sydney Greek couple, Sozos and Shirley Koutsogiannis, enjoy reading The Greek Herald both in print and online. Sozos has always read the paper, while Shirley started reading it online via Facebook in the last few years.

“I like to read the paper to keep up to date on current affairs in Australia and Greece in Greek, in addition to the daily news I watch on Australian TV. I also love sport, so I usually look at the back of the paper first,” Sozos says.

“Shirley, who came to Australia when she was nine, likes to read Greek community news in English via Facebook.”

Shirley adds that some of her favourite stories from The Greek Herald are on other Greek migrants as they remind her of her own migration history.

“The story on the National Monument to Migration at the Australian National Maritime Museum [was a favourite of mine]. I loved reading Bessie’s story because it reminded me of my migration story as I also grew up in a milk bar,” Shirley says.

“Sozos regularly reads out articles of interest to me as well.”

It’s this pastime which the couple say has also kept them connected and entertained during the current lockdown.

“The Greek Herald has been very important during lockdown as it kept Sozos, in particular, connected and is one of the very few things he reads these days,” Shirley says.

“It is a great way to keep up to date with Australian Greek community news via my iPhone and iPad and I love to see Sozos engaged with something as he has been quite down during lockdown.”

George and Dimitria Volikas migrated to Australia in the 1960s from the islands of Andros and Lemnos respectively and they say they’ve been reading The Greek Herald for years.

“It was a little bit difficult when we first came. We didn’t even know the language, but we still had a good life,” Dimitria says.

“Of course, we used to read the paper to get the news about Greece. George used to buy it every day.”

Now, as Dimitria says, things are different. Due to the COVID-19 pandemic, the couple get the newspaper delivered to their Sydney home twice a week and say they are very ‘grateful’ for this service.

“George is very thankful. He can’t go anywhere and doesn’t drive so he passes the time with the paper and sees something he hasn’t seen before.”

The expatriate Laconian, Sotiris Kapernaros, is not only the owner of the well-known delicatessen Lakes Gourmet Deli in the Eastlakes suburb of Sydney, which he maintains with his daughter and son-in-law, but also a loyal reader of The Greek Herald for 58 years.

“I’m from the same area in Greece where Theodoros Skalkos hails from,” says Kapernaros, who recalls with pride that he first bought the newspaper as a new immigrant to Australia in the early 1960s.

“I bought the first newspaper – it was then ‘Hellenic Herald ‘ – from an agency on Castlereagh Street opposite the ATHENS restaurant, in the heart of Sydney. There was also a cafe nearby, the Parthenon, where all the Greeks gathered,” the 77-year-old recalls.

“The first thing I did every morning was go to the agency to get the newspaper. Then we went to work. At that time, the Panhellenic was 6 pennies and once my koumbaro… even told me that with the money I spent on the newspaper, I could buy a house,” he says with a laugh.

Mr Kapernaros was 19 years old when he came to Australia and explains that newspapers were the only timely and valid way for young immigrants to be informed about the news of the homeland.

“The news from Greece was slow to arrive at that time and we were informed by the Herald. Then came the Nea Patrida. We had two newspapers. We learned about politics or football, we grew up with the Herald. It is my companion. I don’t miss a single edition,” says the businessman.

Concluding and wanting to send his message to the new generation through the pages of his favourite newspaper, Mr. Sotiris Kapernaros urges parents to instill in their children a love for reading.

“The Greek Herald’s language is layered and newspapers are the only way for children to learn the Greek language. The Greek Herald belongs to every Greek,” he says.