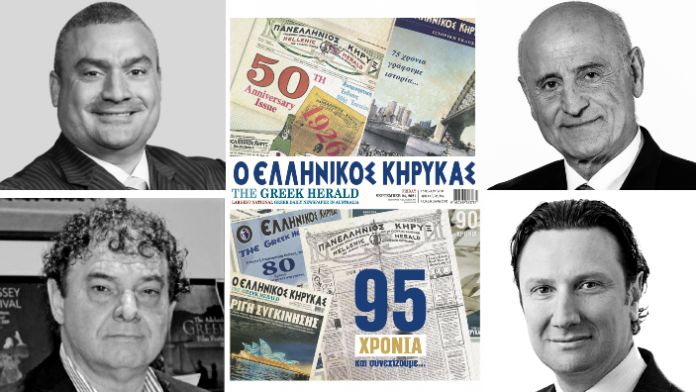 Greek community leaders from Victoria, South Australia, the ACT and New South Wales have sent letters of congratulations to The Greek Herald on its 95th anniversary this year.

Ninety-five years ago the nascent Greek community of Australia was living far more removed from its homeland than we could ever imagine. In this far away Antipodes, a comforting connection with not only Greece but with their fellow Greek Australians and the Greek Australian story that was being written was The Greek Herald.

Its relevance is far more significant than simply a purveyor of news. It was a portal to travel through, a herald to listen to and a significant influence in shaping society. The Greek Herald story is in many ways akin to the Greek Australian story.

Congratulations on being 95 years young.

Bill Papastergiadis OAM, President of the Greek Community of Melbourne

On behalf of the Greek Orthodox Community of SA Inc., please accept our warmest and heartfelt congratulations to The Greek Herald on its special 95th anniversary.

Throughout these years, you proved to be one of the leading Greek-language media outlets in Australia with high-quality and reliable news, including about the activities of all the Greeks of the Australian Diaspora as well as high quality news from around the country and the world.

We have been enjoying a healthy and constructive relationship with your newspaper and we were pleased to see that you embraced the digital world a few years ago, making it even easier to access and share your news articles and the plethora of interesting stories.

We thank The Greek Herald team for our long-lasting friendship and cooperation, and wish it a lot of success and prosperity for many years ahead!

My parents ran a Milkbar in Brighton Le Sands, NSW for 25yrs and I always remember the first thing my late father would do was walk to the newsagency and pick up a stack of Greek Herald papers, for himself and our customers early in the morning.

In the 80’s and 90’s, Brighton was a predominant Greek speaking community. I knew the times and the names of all our customers who would pop into the shop, buy their ‘proino cafe’ and grab The Greek Herald, keeping up to date with all the important news of the day, news from Greece and death notices to see if it was someone they knew.

It was a morning ritual for my sisters and I, as we got ready for school. I loved the conversations with our customers, it gave me so many opportunities to speak Greek and to ‘show off’ all that we had learnt at Greek school. Equally as important, my grandmother would ask us to read certain parts of TGH, as a way of practising our Greek reading skills. I now look back and appreciate all those hidden lessons and the importance TGH played for all ages of our Greek community at the time.

Fast forward 25yrs and I now find myself in the blessed position of President of the Greek Orthodox Community and Church of Canberra, being able to represent our amazing community both locally and nationally.

I was most proud of what we did during the 200yr anniversary of Hellenic Independence and the support TGH gave us for these events. It made me proud that family and friends, both around Australia and in Greece, got to see photos and read articles about the Greek flags flying around the Nations Capital and seeing ACT landmarks turn blue and white, recognising the significance of 1821, for Canberra Greeks, our broader non Greek community, but also for Hellenes around the World.

TGH has transformed over the years to having such a great social media presence, all my family and friends keep up to date with events out of Canberra, especially the progress and growth of our Greek Languages program, which now boasts over 200 students, all our cultural events and of course significant spiritual days celebrated from our beloved St Nicholas church.

Personally, I want to congratulate and thank The Greek Herald for not only their 95th anniversary, but for modernising their journey and impacting readers of all ages. The memories of practising my Greek by reading TGH and for everything they have done in taking all the great news from Canberra and sharing it nationally and globally through their social media outlet has been incredible. When my sister, who lives in Lesvos, calls me after reading a Canberra related article online and shares her gratitude for keeping the ‘floga’ of our language, culture and faith in a land so far away, makes me incredibly proud of our diaspora and what we have done as a community here in Australia.

All the very best to Elaine, Dimitra and the entire TGH team, and on behalf of the Greek Orthodox Community & Church of Canberra, we thank you for everything you have done and will continue to do for us, wishing you all continued strength, success and many more years to come.

The President of the Cypriot Community of NSW, Spiro Constantinou, also sent a letter to The Greek Herald to congratulate us on our 95th anniversary.

In his letter, Mr Constantinou said that “during the difficult years when very few immigrants knew the English language,” The Greek Herald “was the way that the whole of Hellenism not only learned the news from the homeland, but also communicated with each other.”

The President also thanked the paper for standing by Cypriot people during their struggles.

“When Cyprus was going through difficult times, such as in the fifties and later in 1974, The Greek Herald, and the people who worked for it, stood by the struggles of the Cypriot people, as they stood by the Cypriot immigrants of Australia. For this we thank them from the bottom of our hearts,” Mr Constantinou wrote.