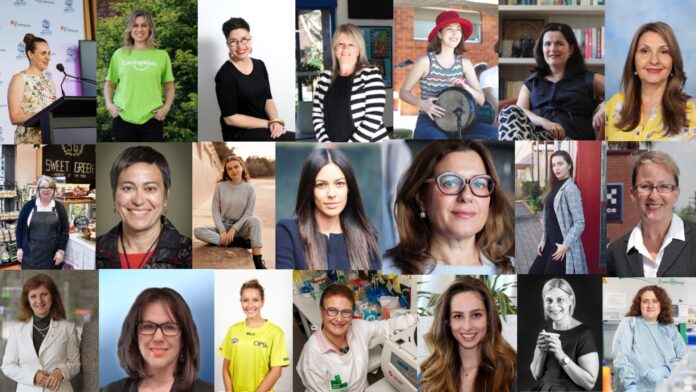 To challenge stereotypes, give back to the community and become role models for future generations.

Ahead of International Women’s Day, on March 8 and inspired by the heroines of the Greek War of Independence who helped shape Greece’s modern history, The Greek Herald has launched the “21 Women for Women for 2021” interview series.

Every Friday, for the next five months, from March 5 until Friday July 23, a woman will be featured in The Greek Herald’s print edition (in Greek) and every Monday on our digital platforms (in English).

Just one day to celebrate women is not enough. Let’s at least give them twenty-one.

Since Suzane’s mother passed away from a brain tumour in late 2013, she has been raising funds and awareness for brain cancer research through the White Pearl Foundation.

“This really isn’t about personal recognition… I mean that sincerely. If recognition of the White Pearl Foundation serves to gather more recognition and support for brain cancer research and brain cancer patients, then that is fantastic and should be the goal.”

“When I learned that it (human trafficking) was happening in my home country and in a place that’s meant to be developed and have so many opportunities for young women and girls, it definitely raised something in me and it was something that I really wanted to make a difference with.”

“This year’s theme ‘Women in leadership: Achieving an equal future in a COVID-19 world is so important as many women were severely impacted last year during the peak of the pandemic and still are. Flexibility was one of the great outcomes of last year. COVID has shown us that true leaders can lead virtually and by embracing flexibility creates more opportunity for female leaders to thrive both personally and professionally”

“My thinking at the time was that once you start a family, that’s it. You can’t really think beyond just having a part-time job. But my PhD supervisor said to me, ‘why should a family stop you from having a career? Just do it.’ It took him to actually tell me I could do it because I didn’t know that I could.”

“It was a childhood dream of mine to be a police officer but my Greek, old fashioned parents, disapproved. I was conditioned to believe that my boundaries could extend no further than being a wife and a mother. So, being a good daughter, I followed their wishes and married a Greek boy and we had two children. At the age of 42, and with the support and encouragement of my husband and children, I applied to join the NSW Police Force (NSWPF)”

“It’s a really humbling feeling and obviously for me, I set out to umpire because I love football being part of the game. From there I’ve been able to help lots of young people see that there are different pathways available to them that we probably haven’t seen before.”

“My instinct for social justice acknowledges that Aboriginal and Torres Strait Islanders have lost contact with aspects of their culture. The richness of Indigenous culture has prompted younger generations to re-engage with their culture and this has also inspired me to delve further into my roots.”

“To women who read this, I say ‘thanks’ and ‘congratulations’. Because as all statistics indicate, you are doing more work and get paid less than people who don’t identify as females. In terms of leading through COVID and beyond, women are already doing this. Women are disproportionately represented in all the various frontline health roles. For one day and then well beyond that day, we need to be really proud and confident in talking about what women’s contributions is.”

“I felt like it was something in my blood, something in my character that I wanted to engage with other people, getting to know my new surroundings and what opportunities there were for me.”

Lisa is an Associate Professor of Law and also identifies with the LGBTIQA+ community.

“I think the real barrier for people entering areas like law is less on the basis of sexuality and gender and probably more on social class. I come from a very proud working class Greek family, but a lot of people working in law come from very privileged backgrounds. That, I think, is what needs to change.”

“I was lucky to land my dream job in a labour law firm and in 1990, I was junior lawyer to my first asbestos case. This is where my love affair began and has not left for me for 30 years. In that time, I have witnessed the best of the human spirit, I have watched clients give their last breath in dying testimony at all hours day or night to secure finance recompense for their family.”

The school provides educational programs for students with high and moderate support needs, including intellectual and physical disabilities.

“As a leader, I make decisive decisions about the school, however, I lead with my heart and with empathy. My connections with students and families are paramount as students are at the apex of all we do at Lucas Gardens School.”

“I look at ancient Greek narratives, mythology and ancient Greek philosophers in a way to interpret science of today. For instance, the myth of Prometheus tells us that humans can be a bit short-sighted with regards to technology and the impact it has. Same with plastic. People created it but they didn’t see how bad it can be for humankind,” says Niki Sperou as she encourages young Greek Australians to keep up their native language skills.

“In the 1918 pandemic of the Spanish flu, two million people died and once the spread slowed down, they went back to normality which then, a second wave hit and killed 50 million people. We do not want to repeat history…”

“I started writing my first cookbook in the chemotherapy chair of Peter MacCallum Cancer Centre. So, sitting on that chair, I needed to have a vision. Because my prognosis wasn’t a good one, they hadn’t given me long to go, I needed to be able to leave something behind for my sons.”

“We’re starting to get more analysis of the women’s games, why players are performing the way they perform, the strengths and weaknesses of the coaching staff and it’s becoming more critical and analytical. We’re moving away from simply, ‘oh gee it’s so good women play sport’, to actually covering it in a similar way we do the men’s game, which I think is really important.”

“To be able to make a difference to the lives of children with cancer and their families by developing better treatments and improving survival rates is very humbling. Even if you can save one child’s life, that’s an incredible feat.”

“My parents, as well as many other migrants, came to Australia for their children and because they came from poorer families, they really valued education and teachers. I mean we’re educating young people to be the leaders of our world today. That’s pretty important.”

“When their parents pass on and there’s someone in the family with a disability, or if it’s their brother and sister, many of these kids end up taking the responsibility for the rest of their lives,” Margaret points out. I just felt like nobody was really noticing them enough, so six years ago I decided to start CaringKids.”

“We still have a long way to go when it comes to reducing stigma against mental illness within the Greek and Cypriot cultures. One of the key ways to reduce stigma is to start to talk about it more openly and honestly, and to normalise that mental health concerns are common and need to be addressed. I believe this change needs to be led by influential organisations within the community, including the church, community services and public figures.”

“Progress has been made, but there is still a need for gender diversity initiatives in the legal profession. There is an underrepresentation of women in leadership positions within firms and

gender inequality and power imbalances are a systemic driver of harassment in workplaces….As a community we need to get behind reforms that tackle the issues plaguing Australian workplaces. We need to have a voice when it comes to driving change.”