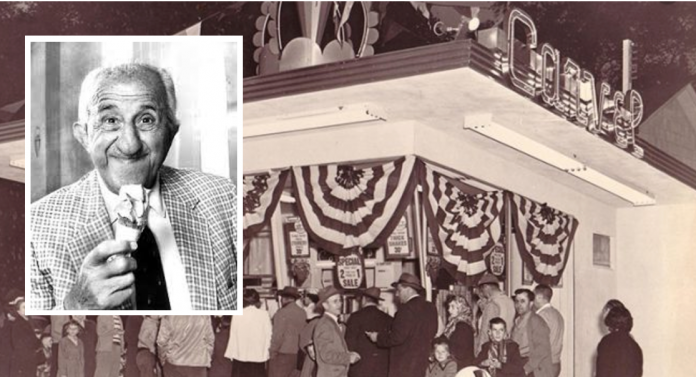 Greek American businessman, Tom Carvel (born Athanasios Karvelas), created America’s first ice cream franchise and is well-known as the inventor of soft serve ice cream. To mark the day of this brilliant man’s death we take a look back at how a flat tire on his truck led to his successful career.

Tom Carvel was born on July 14, 1906 in Athens, Greece. In 1910, when Tom was only four years old, his parents decided to leave what was then impoverished Greece for Connecticut in America.

At the age of 26, after a variety of careers that ranged from a drummer in a Dixieland band to an auto test driver for Studebakers, Carvel was incorrectly diagnosed with fatal tuberculosis and fled to the country air of Westchester, New York.

After borrowing $15 from his then girlfriend and future wife Agnes Stewart, Carvel began selling ice cream from the back of his battered truck.

Some bad luck on Memorial Day weekend in 1934 turned out to be a blessing in disguise for Carvel. When his truck suffered a flat tire, he pulled his trailer into a parking lot next to a pottery store and began selling his melting ice cream to vacationers driving by.

Carvel sold his entire supply of ice cream in just two days. This is when he realised he could make a lot more money working from a fixed location.

The potter allowed Carvel to hook into his store’s electricity. Two years later, in 1936, Carvel bought the pottery store, converted it into a roadside stand, and permanently established himself as the nation’s first retailer of soft serve ice cream.

That same year, he patented a “no air pump” super-low temperature ice cream machine, developed a secret soft serve ice cream formula and introduced the marketing concept “Buy one get one free.”

As Carvel began selling his patented machinery to other stores, he quickly realised that he could sell not only his machinery, but also his expertise.

For a flat fee and a percentage of the profits, Carvel began teaching independent storeowners the ropes and allowed them to market ice cream under the Carvel name. Carvel cultivated this relatively unknown idea called “franchising,” and opened 25 stores by the early 1950’s.

On October 21, 1990, Carvel passed away at age 84. Although he was married, he had no children and his death led to litigation between his relatives and his lawyers.

He left behind him a big fortune, a huge brand with 400 stores around the world, and a myth of entrepreneurship and business strategy taught to this day in business seminars in America. It all started with an accident, a flat tire, which Tom managed to reverse, turning the “American Dream” into reality.

Basil Angelou: A final tribute for ‘The King of Angels’