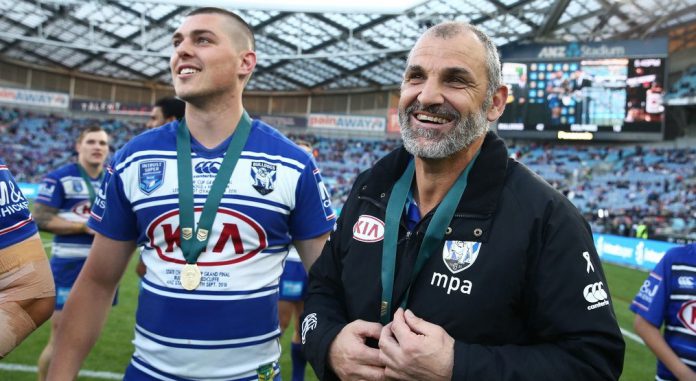 Dean Pay has quit as Bulldogs coach with immediate effect after a tumultuous two-year tenure at Canterbury.

Current Bulldogs assistant coach Steve Georgallis will be the club’s interim coach for the rest of this season after Pay decided to walk mid-season, having been told he would not be offered a new deal for 2021.

Pay addressed his players on Tuesday morning and then drove out of the club.

Hill and Pay met over the weekend with both parties aware it was time for the club to shift in another direction.

While Barrett remains the hot favourite to be appointed head coach, it is unlikely he would take charge at Belmore immediately.

Those close to Barrett claim he wants to remain at Penrith this year in the hope of securing a premiership.

The Bulldogs confirmed Pay‘s exit via statement, saying both parties agreed that it was in the best interests of the individual and the club to part ways.

“These decisions are always tough, particularly when they involve someone who has been part of the Bulldogs family for a long time,” Bulldogs CEO Hill said in the statement.

“The fact is though that the club and Pay have decided that we needed to move in a different direction to take the team forward, and Pay was in agreement that now was the right time for both parties to part ways.

“I‘d like to thank Pay for his contribution over the past three years and all the hard work and passion he has given to the club.”