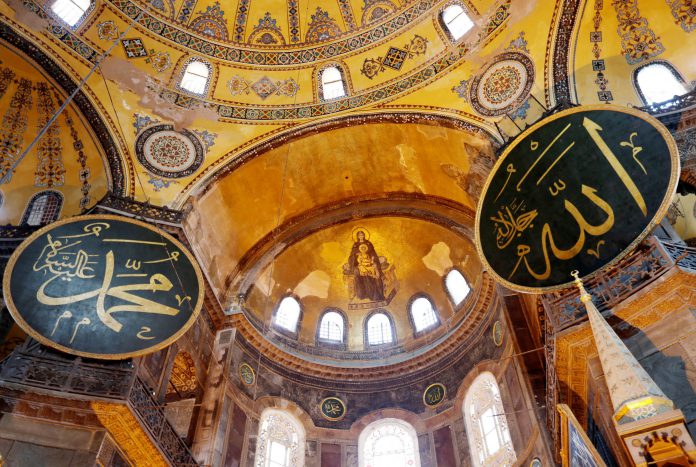 Mosaics in Hagia Sophia will be covered by curtains or lasers during times of Muslim prayer, the spokesman for Turkey’s ruling AK Party said on Monday, after President Tayyip Erdogan converted the museum into a mosque.

The Christian icons would be uncovered and open to all visitors at other times, and admission would be free of charge, the AKP’s Omer Celik said.

It was not immediately clear how the lasers would work.

On Friday, a Turkish court ruled that the building’s conversion to a museum in 1934 was unlawful and Erdogan, declaring it a mosque, said the first prayers would be held there within two weeks.

The move drew international criticism and concern, including from Greece, the United States and Russia, as well as UNESCO and Pope Francis, who said he was hurt by the decision.

Celik told a news conference in Ankara that the biggest disrespect to Hagia Sophia in history was done by the papacy.

He said Orthodox Christians and Hagia Sophia had suffered for years during a “Latin invasion” led by the papacy in the 13th century, when Crusaders pillaged the cathedral.

Greece condemned the decision on Friday, saying it would have repercussions on relations between the two countries and on Turkey’s ties with the European Union. The US State Department said it was “disappointed” by the move.

UNESCO said on Friday it would review the status of the monument as a World Heritage Site following Erdogan’s announcement.

Foreign Minister Mevlut Cavusoglu said Ankara was surprised by UNESCO’s reaction and would let it know of further steps that will be taken regarding Hagia Sophia, which was a Byzantine church for nine centuries before the Ottomans converted it to a mosque.

Turkey is sensitive about protecting its historical character, he said. “We have to protect our ancestors’ heritage. The function can be this way or that way – it does not matter,” Cavusoglu told state broadcaster TRT Haber.