Prime Minister of Greece: ‘Greeks of Australia are an irreplaceable arm of World Hellenism’ 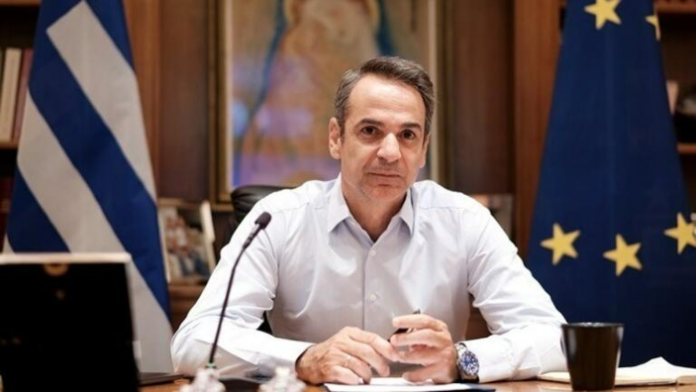 Our homeland “lives” wherever on earth the heart of Greeks beats. Australia is a “second Greece” and our homogeneity is one of the largest ethnic groups in the country. The love for the homeland remains indelible, passes from generation to generation and the community does everything in its power so that every new child born does not forget its roots, its origin and of course, its traditions.

The Prime Minister of Greece, Kyriakos Mitsotakis, honoured us with in-depth exclusive interview to The Greek Herald, the newspaper with the 96-year-old history, which strives every day to convey all the news from home and is a main source of information for every Greek living in Australia.

The leader of the New Democracy Party referred to major issues concerning the community, such as, of course, the very critical issue of facilitating the vote of expatriates. In addition, he spoke about his relations with his Australian counterpart, Scott Morrison, which he described as excellent, about his intention to visit the country in the future, but also about the coronavirus pandemic and whether the Greek government followed the same model as Australia to tackle the crisis.

In addition, the prime minister spoke about the grandiose and ambitious plan for the repatriation of Greeks abroad, which can only be done by creating new and attractive jobs, and of course we did not fail to ask about AUKUS, which was recently the number one current affairs issue globally.

Finally, after praising the Australian diaspora, calling it an irreplaceable arm of World Hellenism, he also sent his message to all Greeks who may live far away, but never forget the country of their fathers and grandfathers.

1. The vote for expatriate Hellenism did not, unfortunately, get the green light from the Parliament. Are you thinking of bringing back the issue, and if so, in what way?

Unfortunately, last May, a great opportunity was missed to remove restrictions on expatriate voting and to allow our expats to vote without formalities in the next election. So the law which was passed with an unprecedented parliamentary majority in 2019 still stands. We will take every possible opportunity to improve the framework for making it easier for expats to vote at their place of residence. And our new goal is for them to go to the polls en masse. A few days ago, in fact, the communication campaign of the Ministry of Interior began, which informs expatriates in detail about the registration process in the special electoral roll and the electronic registration platform, the apodimoi.gov.gr.

2. What is Greece’s relationship with Scott Morrison’s Australian government?

We share with the Liberal Party and the government of Scott Morrison the same adherence to the principles of political and social liberalism and the same belief in the principles of the rule of law and democratic institutions. Our relations, therefore, are excellent and are founded on common grounds, as well as on history. From the Gallipoli Expeditionary Force and the Battle of Crete, Greeks and Australians fought side by side. But also in peace, we have been collaborators over time, with the Greek diaspora of Australia annihilating the tens of thousands of kilometers that separate our two countries. Our cooperation is dictated by history and is founded on common challenges.

3. Is it in your plans to visit the country sometime in the near future?

Australia is of manifold interest: As the second homeland of hundreds of thousands of Greeks but also as a dynamic country, in which people of such diverse ethnic backgrounds coexist harmoniously, but with the same faith in the principles of democratic equality and the social state that Australia embodies. I watch all this from afar and I would like to see it up close, as well as the progress of the diaspora and its contribution to the progress of Australia. An official visit to the Antipodes is always in my intentions. It depends, however, on the workload and the loose ends of everyday politics, which are still bulky.

4. Is the repatriation of Greeks – with some incentives to be given – on your agenda?

From the first moment we took over the governance of the country, the return of the Greeks was a top priority. Because it is at the same time a remedy for an injustice for those who were forced to emigrate due to economic difficulties, a way of halting the demographic decline and, above all, the real wealth of the country. We are already giving multiple incentives for the return of Greeks. I will mention indicatively the reduction of income tax by 50% for seven years and the exemption from documentation for those Greeks who work elsewhere and decide to transfer their tax headquarters to our country.

The main, of course, the axis for the repatriation of Greek scientists and workers is dynamic development to convince them that here they will find ideal working conditions and well-paid jobs. Contributing, at the same time, to the vertical increase in growth. With successive legislative regulations and with the reduction of bureaucracy and taxation, the investment environment becomes much more favourable. I will only dwell on a recent development, Pfizer’s large investment in Thessaloniki, which will create 700 new jobs and has already brought back 50 young Greeks and young people who worked abroad. Sending, at the same time, the message to the Australian diaspora that the homeland is for themselves a self-evident destination to live and invest

5. The Greek community of Australia is very strong and active, economically, socio-politically and culturally. How closely have the two sides worked together and what does Greece expect from expats?

For the Greek diaspora of Australia, any comment is unnecessary. The Greeks of Australia form one of its most robust ethnic communities, with a crucial contribution to the progress of the country and an irreplaceable arm of World Hellenism. Our cooperation with the diaspora will be constantly deepened, we will seek more and more its active involvement in the economic, political and cultural life of Greece. The law on the facilitation of expatriate voting is, after all, a very important step. Our expectations of our Australian compatriots are condensed into just that – getting closer to us. Serving at the same time, as they have been successfully doing for decades, the interests of Hellenism everywhere in the world.

6. Recently the issue of the tripartite security agreement between Australia, the United Kingdom and the United States of America (AUKUS), caused great reactions. What is your opinion Mr Mitsotakis?

We are following with attention and interest the developments of the new tripartite agreement. Although it is located far from our neighborhood, the rearrangement of balances also affects our area, highlighting the need for both multilateral cooperation and Europe’s strategic autonomy. A European Defence Union, the closer cooperation of the member states of the European Union, will undoubtedly strengthen NATO. And through our strong alliance with the US, it will make Greece a key geopolitical player in the Eastern Mediterranean.

7. Australia, admittedly, has done quite well on the issue of the pandemic, although hard lockdowns have been imposed. Did Greece study the way the Morrison government and its state counterparts managed the coronavirus pandemic?

The COVID-19 pandemic, with its global and unprecedented spread, has imposed truly radical measures, to manage both its health and economic effects. As a government, we have certainly studied solutions implemented in other countries and adopted successful practices, adapted to the Greek data. I see with satisfaction that with the Australian government we have coincided with major options: the imposition of strict, but necessary, restrictions on travel and certain areas of economic activity, the systematic and fast promotion of vaccinations but also the “brave” support of the real economy. I should say, therefore, that we followed about the same model, though we are so remote.

8. Finally, a message that you would like to address to the Hellenism of Australia that so loves the fatherland and never forgets it.

My message to our compatriots in Australia is simple and warm. Many times in the past the homeland did not show the same love towards its children who fled. The yearning of Australian Hellenism for Greece was often met by the silence and inaction of the official Greek state. But everything is changing, by making it easier for our expats to vote where they reside, by upgrading the services provided, by physical presence or online, by our consular authorities.

The concern for Greeks abroad, with your dynamic presence in your new country, is a priority of the government, at a substantial and practical level. However far away you may be, and however far away the state may have been in the past, so near you will be with us in the future. Keep alive our language and love for Greece in the hospitable continent of Australia.